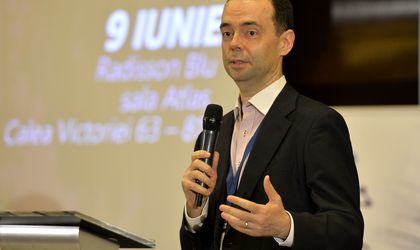 The development of new investment funds will increase the value of Romanian companies, both private and those where the state is a shareholder, and implicitly of Romania’s wealth, said on Tuesday Bucharest Stock Exchange (BVB) President Lucian Anghel.

“As for the ratio between capitalization and the GDP, we must know that [when considering] the GDP in nominal terms, Romania is a champion. The fact that we maintained capitalisation is a good thing. Unfortunately for Romania, we do not have very many companies of extremely consistent dimensions. What blocks access to a higher class of investors with far greater funds is that these MSI criteria are extremely difficult to meet by private companies operating in Romania.

We hope that one day, we will see including Hidroelectrica listed on the stock exchange. Further, I think we will see IPOs in the private sector and if Romanian entrepreneurs will have access to capital. We are performers in terms of growth, both indices and turnover compared to other markets, such as the Czech Republic, Poland, Hungary, Croatia and Greece. The more investment funds we have, the more this legislation will allow for the development of new investment funds, the value of Romanian companies, both private and state, should increase. So, Romanian wealth should grow,” the BVB president said.

Anghel also pointed out that Romania needs to clarify the Alternative Investment Fund Act and this may have a positive effect on the financing of the Romanian economy.

Costs of listing could be an impediment to companies

According to Anghel, the costs of listing are an impediment in Romania. “Romania needs clarification of this legislation (Alternative Investment Fund Act ) and I think this can finance the Romanian economy. The EBRD (European Bank for Reconstruction and Development ) made a study on the impediments to making a listing in the design of a private company. The first element to discuss was the cost of listing – the actual cost of lawyers and those who make the issue prospectus of 500 – 600 pages in Romania. Many entrepreneurs have stayed away in the last two years due to these impediments. In the period 2016 – 2018, there were six IPOs on the BVB, and the growth trend continued, we are aboveHungary, Bulgaria, Austria and the Czech Republic.”

What can Romania learn from Poland?

“I did not include here Warsaw, because Poland is a totally atypical case for the European Union. The Polish government, through European funds, finances half the cost of a company’s listing. The Polish government has this strategy to develop Polish companies to turn them into regional leaders. He uses European funds in a smart way, supports the growth of exports and has dedicated programs and managed to find the instruments through different vehicles, including the Sovereign Fund, through which he succeeds in doing so. Through European funds, it supports the listing of these companies, and there are studies by the World Bank showing that a listed company will pay more taxes to the state because as it is listed, the desire to optimize the tax is consistently reduced as price evolution depends a lot of business growth. I’m not saying that Poland is a model, but they did a lot of good things and we could implement some of them,” Anghel explained.