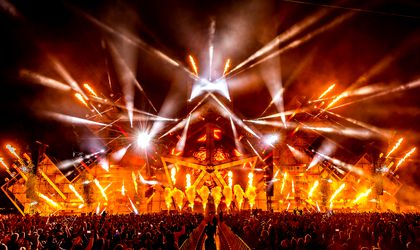 Last weekend, Bucharest was the capital of EDM. On the 10th, 11th and 12th of September, the SAGA Festival brought visitors from over 30 countries, who spent three energetic days with their favorite DJs, in a setting where imagination and creativity were at home. It was the perfect place to make new friends and create a fantastic connection with the artists, who were happy to be in front of the public again.

Although at its first edition, SAGA has already become the biggest music festival in Bucharest, as evidenced by the large number of participants and the financial impact on the Romanian capital – over 130.000 people attended the shows during the three days spent at Romaero. More than 45.000 participants scanned their wristbands daily, 80% of them presented a digital vaccination certificate or proof that they had had the disease in the previous 180 days, and 20% presented a proof of a negative PCR or antigen test or were tested at the festival access points. Only 15 attendees tested positive for COVID-19: they couldn’t join the festival, as they followed the medical protocol established by the authorities, but they will receive subscriptions for the 2022 edition of SAGA.

The three days of the festival produced revenue of approximately 25 million euros, money coming from accommodation, transport, on-premises consumption at pubs in Bucharest, to which the taxes paid by the organizer ALDA following the revenue from SAGA are added. Furthermore, the Romanian capital has benefited from international popularity, many foreigners already expressing their desire to participate in the second edition, which will take place on June 3rd, 4th and 5th, 2022.

“Beyond the fact that we are very happy with the presence of so many people from all over the world at the first edition of SAGA, we are also delighted that this way we can contribute to the local budget and to the promotion of Romania abroad. Most of those who took part in the festival were fully vaccinated, and this was verified with great rigor by the authorized staff at each of the access points. ALDA has big long-term plans here and ambitious projects that can help develop the tourism locally. We will bring forth lots of news and surprises sooner than you expect”, stated Allan Hardenberg – CEO ALDA.

SAGA Festival has already started the preparations for the 2022 edition and people will be soon able to start buying the tickets for next year. Also, the first big artists from the line-up will be announced. Those who want to be the first to find out the news about the second edition and to buy tickets at special prices can register here.

From SAGA Festival to Sound of Bucharest: New concepts in the Romanian events...

SAGA Festival kicks off on Friday in a grandiose concept, with thousands of...

Calvin Harris to perform in Romania for the first time at SAGA Beach...