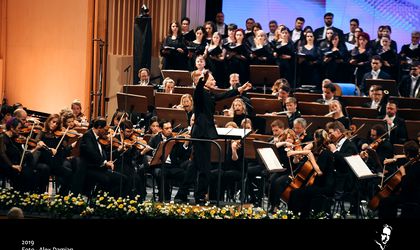 The George Enescu International Festival invites classical music lovers to enjoy Enescu’s Vox Maris on www.festivalenescu.ro during this year’s Christmas Holidays. The recording offered presents the symphonic poem Vox Maris with London Symphony Orchestra under the baton of Maestro Gianandrea Noseda and the Romanian Radio Academic Choir conducted by Ciprian Tutu, with tenor Cosmin Ifrim as soloist. The performance was given during the 2019 Enescu Festival, on the Grand Palace Hall stage in Bucharest. The recording can be viewed free of charge starting Thursday, December 24, until the last day of 2020, by accessing this link.

The idea of the symphonic poem Vox Maris had preoccupied George Enescu as early as 1925, but its completion was a long-winded process, as the Maestro revisited the 1929 first draft numerous times and included it among his creations only in 1954, under opus number 31 (second-to-last). Scored for soprano, tenor, choir, and orchestra, in free sonata-form, and dedicated to Princess Elena Bibescu, Vox Maris received its première in Bucharest posthumously, in 1964. Based on a French and Breton text by Willy, the libretto was written by Enescu himself. The poem owes its soundscape originality, according to composer and musicologist Pascal Bentoiu, to “an innovative and luxuriant orchestral distribution, which is hardly matched in the history of the 20th-century music.”

In his Memories, Enescu detailed his personal experience of everything revealed musically in Vox Maris: “Yes, I have seen everything that I will describe. Imagine a stormy sea. A sailor stands motionless, watching, his eyes on the horizon. The blizzard swells, blowing up in flares. A siren howls in the distance. Cannon thunder alarms. Cries can be heard in the storm; the lifeboats are lowered. The sailor grabs the oars and starts rowing towards the wailing. People on shore follow with their eyes as the boat rides the crests of the waves. Suddenly it vanishes. The waves hurl themselves against the frail craft that abruptly sinks. The wind blows over the waves, which the dusk seems to tint in blood. The sea has swallowed its prey; sated, it regains its calm. As night falls, the only sounds are those of waves on the shore, and, far away, the ancient Sirens’ song. Sacrifice has appeased the angry gods of the sea. The moon shines across the waters…”

The London Symphony Orchestra will perform again at the 2021 George Enescu International Festival, under the baton of legendary conductorSir Simon Rattle, while the symphonic poem Vox Maris will be interpreted in the upcoming edition of the Festival by the Mariinsky Theatre Orchestra, with Maestro Valery Gergiev on the podium.