Quantum physicist-Ballerina Dancing with the Robots comes in Romania 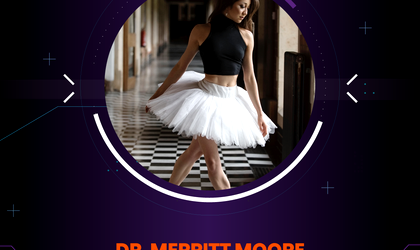 GoTech World, the largest IT & Digital event in Central and Eastern Europe, that will take place on 3-4 November at Romexpo, Pavilion B1, announces the presence as a star speaker of one of the most interesting figures of both the scientific and artistic world, Dr. Merrit Moore.

Merritt, a world-class professional ballerina, as well as a physicist specializing in quantum physics, has become famous over the recent years, especially during the pandemic, as she designed and performed choreographies along with industrial robots. Such performances combining art and technology have been featured in prestigious publications such as TIME, Financial Times, BBC, and Vogue.

Merritt started dancing at the age of 13. When he was 15, she travelled to Viterbo (Italy), where she met Irina Roșca, a former dancer of the Bucharest National Opera Ballet. Merritt trained with the Romanian-born ballerina during her time spent in Italy.

Merritt Moore works with an incredible team of artists and researchers to stage eye-catching performances as a mix of science and art, including romantic and emotional duets with industrial robots.

The physicist-artist explores the future of AI/machine learning, particularly in dance, and researches the incredible potential of artificial intelligence to augment human creativity.

Merritt inspires young ladies around the world to follow their dreams

Merritt was invited as a keynote speaker at the Forbes Women’s Summit in New York. She was also the protagonist of the ”Women in STEM” panel of the US Embassy in London.

One of the unique projects of the physicist-artist was presented at the Victoria & Albert in London, the largest museum of decorative arts and design in the world, in 2017, as an installation called Slave/Master.

This foregrounded the exploration of the ”boundaries” around human/robot interactions, reversing the traditional ”fear” depicted in sci-fi films of robots oppressing humans.

Moore was also one of 12 candidates who underwent a rigorous selection to become astronauts in a (2017) edition of a BBC Two reality show.

Moreover, she was invited to America’s Got Talent in 2021 and she got a ”YES” from all 4 jury members.

Merritt is a speaker at events around the world, participating in TEDx Oxbridge (2013) and TEDx Oslo (2019), in projects held in the LA Music Center, as well as in various schools from Hong Kong to Germany.

During the pandemic (2020), she was invited to Harvard ArtLab (an experimental workspace for artists, scholars, and creative processes) to perform some dance with an industrial robotic arm.

She is co-founder of the SASters (Science&Art Sisters) NGO allowing her to establish a community through which projects can be carried out to support children and young people who dream of pursuing a career in both science and art.

Merritt Moore gave an interview to the Financial Times in March 2021, in which she explained the mix of science and art.

”Sometimes it’s better to let machinery do their thing. A good idea, the right music, and a few weeks of hard work can turn hard steel into poetry. I am very interested in the fusion of science and art. When these two meet, one often gets bad art and bad science. My main mission is: to pursue research and science from an art’s perspective, pushing it to the cutting edge of technology. Can I possibly make even better art?”

She is currently an deputy professor at the New York University in Abu Dhabi, where she teaches robotics and dance.

Dr. Merritt Moore will meet the Romanian public as the star speaker of the GoTech World event on Friday, November 4, at 10:45 A.M. on the Main Stage, powered by Orange Business Services.