Value gets fashionable for clothes companies 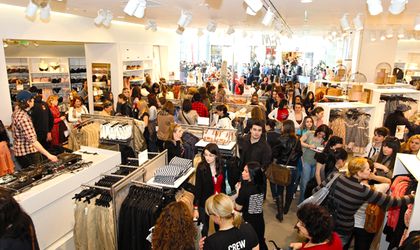 This year the local fashion retail market will post minimal growth, with full recovery not expected sooner than 2012. But as more discerning shoppers set new trends on the market by spending less while at the same time paying more and more attention to value for money, innovation has become this season’s must-have among fashion retailers.

Rationality and fashion are not exactly what one would call a perfect match, but the crisis is setting new trends by bringing fashionistas down to earth. Gone are the times when Romanians were eager to throw money away on clothes like it was going out of style. In 2010 the average Romanian dedicated 6 percent of his or her outgoings to clothing and footwear – about EUR 10.5 per capita each month in the last quarter of 2010, according to Business Review estimations compared to 6.7 percent in 2007 and 2008. More than this, fiercer competition on the local fashion retail market is forcing local players to come up with different approaches and new strategies in order to keep sales and raise market share.

The rules of the game are changing. As shrinking personal budgets make for more demanding shoppers, delivering real value while being able to communicate this convincingly will be the main challenge for fashion retailers this time around, thinks Andreea Enache, senior marketing consultant at Ensight Management Consulting. And this trend is not going to go out of date any time soon, experts argue. “There is a general shift in all retail towards ‘value-for-money’ products. This seems like it is going to last a long time, even after the signs of crisis have gone,” Alexander Athanassoulas, president and managing director of Stirixis, told Business Review.

In this context, the entire marketing process needs to be re-evaluated and redesigned with the clear aim to increase loyalty in an industry that is volatile and fickle by nature, Enache adds.

Romanians are not very loyal to brands when it comes to fashion retail and the situation will not change as long as they don’t perceive a fair relation between price and quality as well as a distinct image.

“So far, the price-quality ratio is distorted and fashion brands haven’t managed to build a clear identity that easily resonates with customers. This is why the loyalty level is still low,” Enache tells Business Review. Motivating loyalty programs should help do the trick but this sort of strategy is currently in its infancy on the local market.

Price perception remains the main deal breaker, but at the end of the day, tailor-made strategies produce the best results.”It is important to note that the products themselves have become commodities. It is what they ‘carry’ with them that affects the shopper. By this we mean for example the customer’s experience in the stores, complete concept designs, brand values communicated, prestige and social status and others,” says Athanassoulas.

The fact that Romanian shoppers are less and less inclined to pay a premium price for what is in reality an average product, stands as proof that the market is maturing.

“I believe that presently the local fashion retail market is undergoing some serious changes, especially because it is finally becoming clear what the low, medium, high and luxury segments actually mean,” says Enache. While prior to the crisis the mere fact that a store was located inside a shopping mall was enough for it to be perceived as premium, this is no longer the case. “This mechanism will no longer work and retailers will have to find new arguments in favor of their positioning on a certain segment,” she adds.

There are considerable differences between the manner in which some brands are positioned locally compared to their place on Western markets and one such example is Inditex’s Zara. Upon entry into the market in Romania, Zara benefited from a big consumer appetite and weak competition, and so positioned itself as a medium to high market brand. But on Western markets this brand is decidedly mid-market, Enache adds. The same is true of the local Marks & Spencer network. As consumers become more demanding and competition increases, the gap in perception is expected to narrow, according to Enache.

Newcomer H&M on the other hand is an example of an international brand that has positioned itself locally in line with its global profile, with the motto: fashion and quality for the best prices. Other company principles are an inventive store design and efficient logistics. H&M’s Romanian launch campaign shows that the company gladly embraces advertising. On the other side of the fence, competitor Zara has a policy of almost zero advertising.

Only 0.3 percent of sales are put into advertising while most competitors in the industry invest approximately 3.5 percent of their turnover in marketing, says Enache.

Zara’s unique selling point is to create or imitate the latest trends within a short two-week period. The new styles are available on sales floors for no more than four weeks, thus putting pressure on shoppers to buy now.

This allows the retailer to discount only 18 percent of its products, compared to approximately 35 percent in other fashion retail companies.

Hot for the new season… investments

While the economic recession has slashed personal budgets, the full half of the glass is that it has also brought cheaper expansion costs. Backed by international networks and armed with global know-how, players such as Inditex and C&A continued to open new units last year and further expansion plans are still in the cards.

An increase in the availability and development of retail projects is also key as most of the local fashion retailers continue to focus on shopping malls when choosing locations – albeit now they are driving a harder bargain.

The opening of the first local H&M store is this year”s biggest event in fashion retail so far. In less than a month, the Swedish retailer has opened five shops in Bucharest and one in Brasov. Two new units will follow this autumn in Timisoara and Cluj-Napoca, said company representatives.

According to Laura Sinca, PR & marketing manager at H&M Romania, the retailer’s local business strategy is the same as anywhere else in the world. “The best location for our stores – this has been our expansion principle since 1947 when the company was set up. H&M would rather postpone the opening of a new store and wait until the best location becomes available,” Sinca tells Business Review. Judging from the preliminary results, H&M says it is off to a good start on the local market.

“Romania is an interesting market, with a young population which is passionate about fashion. We believe that there is huge potential for expansion in this country,” adds Sinca.

But before H&M and many of the other players active locally even considered the local market, the pioneer was Inditex Group. The Spanish fashion retailer came to the country in 2004 by franchising two stores. In 2006 it decided to operate directly on the local market and over the next few years implemented an aggressive development strategy, bringing seven of its eight brands and extending to other locations in addition to Bucharest.

Presently, the retailer’s network includes 56 stores, the last five of which have been opened since the beginning of the year. Ten more units should begin trading by the end of 2011.

C&A is another important international player with a long to-do list this year. It operates a network of seven stores locally and about eight new units should be opened throughout the course of 2011. “We are planning a long-term course and sustainable growth on the Romanian market because we believe in its potential. In 2011, we plan to open about eight new stores across the country, mostly in shopping center projects in large towns,” Cristian Codrea, district manager for C&A Romania, told Business Review previously.