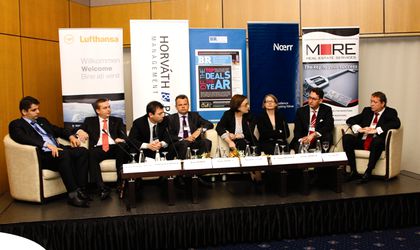 German companies with local operations have mixed feelings about the pros and cons of doing business in Romania. Nevertheless, most German investors have weathered the crisis well and continue to find business opportunities in Romania, argued attendees at the third German Business Forum, organized by BR last week.

Romania continues to be an attractive investment destination from an economic perspective, but the general investment climate – the administrative, legal and judicial environment – still poses barriers to foreign investors in spite of the authorities’ efforts to address some of the existing issues, believes Sonja Kreibich, head of the economic section of the German Embassy to Bucharest. To give an example, the way in which public tenders are being handled lacks transparency with some being canceled without clear reasons, said Thomas Benedikt Singh, regional manager for Romania of Reinhold Meister Group.

Above all, there remains the issue of the general perception. “A problem we are still facing is the fact that Romania has a bad image,” added Radu Merica, president of AHK, the Romanian-German Chamber of Commerce. He said that currently there are no big German investments in the pipeline, only expansion plans for already existing facilities. While most of the German companies operating in Romania have remained here others have closed local operations, AHK’s president went on.

A field where Merica sees future growth potential is green energy, whether it is in delivering the necessary equipment or building production facilities. Present at the event, Wilhelm Balbierer, country chairman of Osram Romania, said there was a clear interest to develop this field but very often the costs of setting up and running such projects are not fully understood. Lack of thorough business plans also raises problems when companies are looking to obtain financing from banks, cautioned Thomas Debelic, senior representative of Commerzbank. While Romania has the legislative framework that regulates investments in green energy, the secondary legislation is still missing making it hard to implement the primary. Lack of clear legislation, something that also hampers financing, convinces many investors interested in investing in green energy, including German ones, to put their projects on hold, said Uwe Kühn, managing partner of IRED Partners, a company specialized in energy projects including EU funding.

Nevertheless, Romania continues to have an interesting mix of factors that keeps it on the watch list for investors, commented Kurt Weber, managing director with Horvath & Partners.

Taking a look at what is happening in the region, Romania is now facing fiercer competition than before. It is seen as being on the same level as other countries like Serbia and Croatia when foreign companies are looking for new destinations to expand their business said Rusandra Sandu, associated partner and head of the corporate/M&A department at Noerr and also the event’s moderator.

The third edition of the German Business Forum gathered around 50 attendees and was organized last week at the Crowne Plaza Hotel. The event was sponsored by Noerr, Horvath & Partners and Lufthansa.