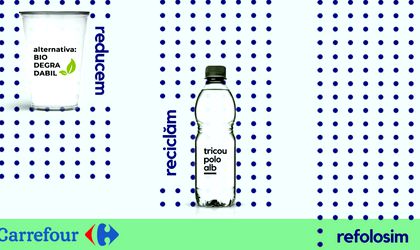 Carrefour Romania presents the results of the circular economy program We Put a Price on Plastic, which brings forward concrete actions in order to responsibly use resources, protect the environment and support local partnerships, as well as announcing its continuity in 2021.

“Since 2018, through the global philosophy Act for Food, we have committed to ensure a smooth transition to healthier eating habits, locally sourced and accessible in terms of price. This commitment couldn’t have been achieved if we didn’t look for ways to solve the waste issue as well – more specifically, the amount of plastic in nature – affecting the quality of air, water, and soil which stands between farmers and a healthy and clean harvest. We launched We Put a Price on Plastic in 2019 since it was time to switch, together with our customers, to a smart and responsible resource consumption. A year later, we’re happy that we reached, through the Carrefour network and its services, the members of the communities which put a price on plastic and resources every day and therefore protecting the environment and also supporting the local producers.” Anca Damour, Executive Committee Member Carrefour Romania

About We a Put Price on Plastic campaign

On July 9, 2019, Carrefour Romania launched the program We Put a Price on Plastic, a circular economy program that treats plastic as a resource and encourages the development of better practices among customers, keeping in mind the 3 Rs – reduce-reuse-recycle. We Put a Price on Plastic changes the current conversation and offers the customers not only a new perspective but also concrete actions that they could take to change their habits. The campaign aims at educating customers on responsible resource consumption and developing infrastructure that supports them in switching to better practices, while shopping, in stores, but also from home, with their families.

The following initiatives are part of the program We Put a Price on Plastic:

In 2020, Carrefour added two new initiatives which give customers the possibility to adapt to a more responsible behavior towards the environment:

In 2021, Carrefour Romania continues with the program We Put a Price on Plastic and stays close to its partners and customers, through the means of concrete actions aimed at selective recycling and introducing plastic, and other resources, in an economical circuit, fighting food waste, transforming waste in compost and encouraging the use of biodegradable materials that don’t harm the environment. Also, according to European Directives, Carrefour will take action to withdraw disposable plastic from all retail stores, and none the least, protect the natural resources by encouraging responsible consumption.