The fall harvest of Romanian cinema 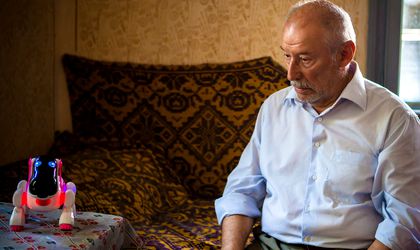 The themes dealt with by the recent releases of the New Romanian Cinema’s (NRC) filmmakers match each one’s artistic personality. And yet, a closer look at the five titles that have premiered since late September shows some “elective affinities” amongst the directors.

When Evening Falls on Bucharest or Metabolism, director Corneliu Porumboiu reflects on the filmmaking process and the aesthetic changes brought about by the transition from film to digital camera. The conversation between Paul (Bogdan Dumitrache), a director who is about to make a movie, and his main actress, Alina (Diana Avramut), enables Porumboiu to embark upon a detailed analysis of the positive aspects of shooting on 300-meter celluloid film, which constrains the director to a maximum 11-minute take. Aesthetic rigor is lost with the digital camera, which can shoot for hours, without pause, argues Paul. The regular moviegoer might find the whole debate uninteresting and too long, despite the self-irony that permeates the film from the beginning to the end. However, the topic of Porumboiu’s latest movie looks like a step aside by the Police, Adjective director from the NRC’s subjects of interest, a step that gives him the opportunity for self-reflection, thereby putting in perspective the first part of his filmography and, with it, the New Wave itself.

With the recent release The Japanese Dog (Câinele japonez), director Tudor Jurgiu also steps outside the NRC coverage area, looking into rural Romania and its people, so far totally ignored by local filmmakers. A family drama, the movie focuses on the communication issues between old Costache (Victor Rebengiuc – in picture) and his son Ticu (Serban Pavlu), who emigrated and married a Japanese woman, and has now brought his wife and son to visit his father, whose house was almost entirely destroyed by the floods. Rebengiuc’s performance reminds the Romanian viewer of his powerful Moromete character (in the Stere Gulea film of the same name), the very embodiment of the proud and stubborn peasant, who derives his wisdom and his vital energies from an ancestral bond with the earth he is working.

Also a family drama, but this time with a different kind of twist, is Roxanne, the debut of director Vali Hotea (who has so far worked in television), who also wrote the screenplay with Ileana Muntean. Inspired by a real-life situation, the film is a psychological analysis of different human typologies that relies heavily on the acting skills of the protagonists.

While checking his Securitate file, nosy middle-aged Tavi (Serban Pavlu) discovers that he is the father of a baby that resulted from a brief high-school affair with Roxana. From this point the story unfolds more or less as expected, yet maintaining the viewer’s interest, with Pavlu in top form.

The real outsider on the NRC’s landscape is the English-language A Very Unsettled Summer, the dramatization of a short story by author Philip O Ceallaigh, an Irish writer who has lived in Bucharest since the early 2000s and was also one of the copy editors of Business Review during those years.

Director Anca Damian, who wrote the screenplay along with O Ceallaigh, chose an international cast which includes two Romanian rising stars – Ana Ularu (Maria) and Diana Cavaliotti (Irina) – and Game of Thrones actor Jamie Sives in the role of a Scottish journalist (Daniel) who lives in Bucharest.

The film falls, as I’ve mentioned, outside the realism box and its “slice of life” aesthetics and can be put in the same category as Porumboiu’s Metabolism.

This is why, despite the hot scenes that act as a trigger for a larger audience, the targeted public is rather the niche of film lovers who are interested in reflecting on film as an art in the 21st century.

The dream-reality duality that opens a liminal space is the idea around which director Bogdan Mustata has built his latest movie Lupu (Wolf). For the 16-year-old eponymous character (Bogdan Vasilescu), the reality of the girl next door Clara (Ada Condeescu) and the old couple of neighbors is unsubstantial, dissolving into a dream-like state. In an interview given ahead of the premiere of the movie, Mustata said his main goal with this film was to achieve a palpable atmosphere of dream-like reality, a “pulsation” of this intermediary space.

The film’s aesthetics remind the Romanian viewer of pre-1989 local cinema and the refuge it took in the symbolic format, from the leverage of Social-Realism.

At a glance, it looks like Romanian film directors are ready to abandon the New Realism that made them internationally famous and move into a new era. How local and international audiences and critics will respond remains to be seen.