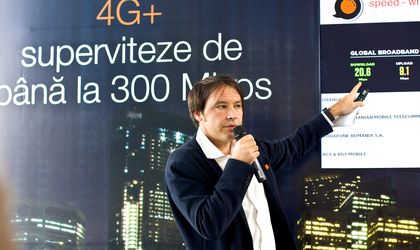 Romania is the first country in the Orange group where the telecom operator will be launching the Orange TV stick, a small device that connects the TV to the smartphone or tablet to allow users to watch files, series, shows and TV channels on the big screen, using the mobile device as a remote.

“Orange TV stick continues the tradition we started when we launched the TV as a multiscreen service. It is an innovating product that answers the need of television lovers to enjoy total freedom in watching TV content and flexibility in choosing the screen. The fact that Romania is the first country in our Group where we are launching this product honors us and proves once more the importance we give to promoting the Orange TV service,” said Julien Ducarroz (in picture), chief commercial officer at Orange Romania.

The stick is portable and can be used anywhere in Romania.

According to the press release, 100 Orange customers were invited to test the Orange TV stick and their feedback will be taken into consideration before the stick is introduced into the commercial offer.

The company has previously involved its customers in testing its products since before, when it launched its Orange TV service in 2012.

In order to be able to use the stick, customers need a smartphone or tablet on Android or iOS, a TV set with HDMI port and a secure Wi-Fi connection. With the help of the applications Orange TV Go and stick Orange TV, the smartphone or tablet becomes a remote and the mobile content will appear directly on the TV screen.