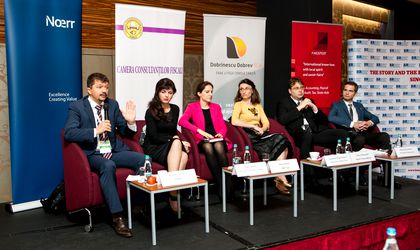 The latest changes to VAT and profit tax legislation, implications of recent measures taken to fight fiscal evasion, changes to international tax reporting rules and the need to improve holding legislation were some of the topics discussed by participants in BR’s 14th Tax & Law conference which took place in April.

The last month has seen tax inspections by the National Agency of Fiscal Administration (ANAF) make the headlines, and while this is good news for the fight against tax evasion, there are also increasing concerns about abusive practices by ANAF, said event participants.  In their attempt to find and hold accountable companies who evade tax, the authorities are making life harder for all firms, especially those that already comply with the law, argued some attendees.

“This remains a problem In Romania: the fact that laws continue to be drafted for companies that already comply and don’t reach those who don’t,” said Dragos Doros, director of taxation services at KPMG Romania. “The moment the fiscal authorities want to set up filters to prevent tax evasion what they are really doing is erecting barriers to doing business in general.”

Talking about tax inspections, Luisiana Dobrinescu, lawyer with Dobrinescu Dobrev SCA, said the authorities generally have a ‘presumption of guilt’ approach and many of the measures taken against firms suspected of fiscal wrongdoings are not only counterproductive but often abusive.

“We need the legislation to support the fight against tax evasion, but this should not generate collateral victims. The existing legislation disadvantages taxpayers in relation to the fiscal authorities,” she stressed.

And while the new Fiscal Code draft, if adopted, will introduce several incentives meant to attract new investors to Romania, the poor relations between the authorities and taxpayers act as a deterrent. “ANAF’s attitude towards taxpayers is the greatest setback to trying to convince investors that staying in Romania is good business,” said Gabriel Biris, partner at Biris Goran SPARL.

Unfortunately the new Fiscal Procedure Code which, if adopted, will bring several changes to the relationship between fiscal authorities and taxpayers, doesn’t bring much good news for the latter, although some of the changes do sound promising. “It was mainly drafted from the fiscal authorities’ perspective and less from the taxpayer’s,” said Silviu Badescu, tax director at NNDKP Tax Advisory Services. For example, a change made to the Fiscal Procedure Code introduces the “in dubio contra fiscum” principle, which means that when the law is unclear it will be interpreted in favor of the taxpayer. However, this is a measure of last resort and only applies after the authorities have used all the other means available to them, explained Badescu.

Present at the event, Oana Iacob, head of service at the department for VAT legislation within the Ministry of Public Finance, talked about the main changes to the VAT legislation coming into force this year. One of the most important ones is that as of January 1, telecommunications, broadcasting and electronic services will have to be taxed in the country where the customer is registered, regardless of whether the customer is a business or individual, she explained. Other VAT related changes coming into force this year have to do with the determination of the VAT taxable base, the registration or annulment of registration for VAT purposes and cutting VAT to 9 percent for accommodation services.

However, one of the most hotly debated matters during the event was the changes to the criteria for registration for VAT purposes triggered by several orders of the president of ANAF (“OPANAF” 17, 19, 18,112/2015). As a result, in order to register for VAT purposes, but maintain existing VAT registration numbers, companies established under Law No. 31/1990 must demonstrate both the intention and the capacity to perform economic activities by submitting form 088.

While the measure is meant to address tax evasion, it also creates difficulties and increases bureaucracy for complying companies, argued participants.

“Someone thought about ways to filter tax evasion and came up with this form. My only suggestion to the president of ANAF would be to ask those who came up with it to actually set up and register a company for VAT purposes, especially a company with foreign associates,” said Doros, adding that he expects EU infringement proceedings against Romania for this measure as it is a barrier to doing business.

What creates most problems in practice is that the criteria based on which ANAF accepts or rejects a company’s VAT registration are unclear, said Mitel Spataru, tax manager at Finexpert. “These criteria are not transparent and there are no instructions about form 088,” he protested.

The now famous form 088 has to be submitted not only by firms that want to register for VAT purposes but also by ones that undergo ownership changes, said Ioana Hockl, partner at ZRP Tax. “Companies that have more than proved their capacity to perform economic activities find themselves in the situation of having their VAT registration number canceled and having to undergo this bureaucratic and discretionary process once more. This is not normal,” she commented.

Registered sole traders, too, have good reason to complain, said participants. Should the new Fiscal Code pass in its current form they will have to pay higher taxes, noted Alexandru Aron, executive director of the Freelancers’ Associations. “A registered sole trader (PFA) currently has to invoice EUR 68 / hour in order to earn EUR 50 / hour. If the Fiscal Code Draft is passed, the PFA would have to invoice EUR 88 / hour to earn the same amount.” Not all of this difference can be passed onto the client, meaning sole traders will lose one of their main competitive advantages, lower prices, he pointed out.

One of the few pieces of good news for taxpayers this year has to do with the tax on profit. “After more than two years the norms for research and development (R&D) activities have finally been approved. This is the most significant change in the area of the tax on profit and it is one for the better I would say,” commented Florin Gherghel, head of the tax department at Noerr Finance & Tax. One of the benefits that companies investing in R&D have been offered is an additional 50 percent deduction of the eligible expenses for R&D activities in the calculation of profit tax.

Increasing transparency is not only a target of local fiscal authorities but part of an overall trend in OECD and EU countries, said Cristina Saulescu, tax manager at PKF Finconta. Global pressure to reduce tax avoidance by increasing transparency will lead to several changes in reporting standards which Romania too will have to implement, added Alexandra Smedoiu, senior manager, fiscal consultancy, PwC Romania.

Transfer pricing is only one of the areas that will undergo such changes. Groups of companies will also have to include a country-country report in their transfer price documentation which will feature extensive financial information including, for example, information about royalties, said Saulescu. Other changes will have to do with improving the exchange of information at international level, double taxation treaties, limitations to deductibility and new anti-abuse measures, noted Smedoiu.

While compliance with international tax reporting changes is mandatory, Romanian authorities should also consider following the example of other European countries and upgrade the local legal framework to accommodate more foreign investors. One area where the state could do that is the holding legislation, said Dan Schwartz, managing partner of RSM Scot. Romania took the first steps in this direction last year and under certain conditions local holding companies now benefit from profit tax exemptions for revenues from dividends received, the sale of shares and the liquidation process. Should the Fiscal Code draft be passed in its current form it will include another measure meant to support holdings – dividends received from Romanian companies will be non-taxable. However, despite such steps forward, Romania still doesn’t allow fiscal consolidation and it still taxes revenues from interest rates, added Schwartz.

Overall, promoting a holding-friendly legislation would be an important step forward for Romania’s economic development, he urged. “The tax cuts included in the new Fiscal Code draft would reach their full potential if the holding legislation were correlated accordingly. I’m not necessarily an optimist, but I want to believe that in the context of a new Fiscal Code there is a higher chance of seeing more foreign companies registered locally, provided that form 088 is also changed,” concluded Schwartz.