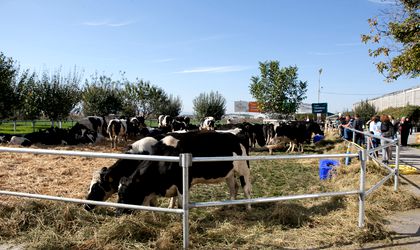 Danone Romania will invest EUR 1.9 million over the next four years in a support program for 800 small dairy farms in underdeveloped areas. Such farms are the least prepared for 2014 when the European Commission’s third and last derogation regarding milk quality in Romania will expire.

Less than a year and half before Romania will have to meet the obligation to produce only EU quality-compliant milk, the local dairy farming sector remains very fragmented. There are some 780,000 dairy farms in Romania, but out of this, a whopping 85 percent are backyard family farms with between one and three cows.

By January 2014, all dairy farms and dairy processors have to produce and process only EU quality/safety-compliant milk, and non-compliant milk can be used only for own on-farm use.

In the summer of 2011, about 80 percent of the milk delivered to the dairies was EU-compliant, according to a report by the National Sanitary Veterinary and Food Safety Authority (ANSVSA) based on which Romania got the last derogation. At that time the Romanian veterinary service was confident that the percentage would significantly grow before the end of 2013. However, not everyone is that optimistic.

Dorin Cojocaru, the general director of the Romanian Dairy Processors Organization (APRIL), thinks the local market risks witnessing a sharp decrease in milk quality with less than 45 percent being EU-compliant, he told BR.

The reason for this is that local dairy farms have been hit hard by the economic troubles of the past two years and are facing considerable financial difficulties which directly impact the quality of the milk produced, he explained. The recent hike in feeding costs due to the severe drought this summer is for many small farmers the last drop in an already full glass. They are asking for higher prices for the milk they produce but dairy processors aren’t having an easy time either, as they are caught between increasing production costs and consumers’ reduced purchasing power, says Cojocaru.

In his opinion, Romanian dairy farmers are vulnerable to what 2014 will bring. Over the past 10 years there hasn’t been a strategy to support them and many of the investments that have been made in farm modernizations have come from own resources. “European funds are hard to access due to bureaucracy and the fact that it is very difficult for the farmers to come with the money necessary for their share of the project. Romanian farmers haven’t had the same support as those from other EU member states – it is an unequal fight,” he said.

A clear short, medium- and long-term strategy for the industry, easier access to financing and reduced VAT on food products are only some of the many measures that should be implemented by the authorities, argue players. “The last governments haven’t had any strategy to support dairy farms. And now it is too late to believe that we can witness a significant catch-up with EU farmers,” he added.

Not only dairy farms but the entire industry is looking at hard times over the next couple of years with more bankruptcies ahead and increasing competition from producers and dairy processors from outside Romania.

Danone Romania has recently launched a socio-economic support program for small farmers in underdeveloped areas of Romania which the company hopes will help prepare them for 2014 when all the milk they produce will have to be EU-compliant in order to sell it. A Chance for your Family is a project developed by Danone Romania in partnership with Heifer Romania, an NGO which focuses on assisting communities in need, and the Danone Ecosystem investment fund which is providing the necessary funds. The project will require a EUR 1.9 million investment and will take four years to implement.

The purpose of the program is to encourage small farmers to deliver quality milk by helping improve the genetics of the cattle and also to encourage them to work together in order to develop sustainable businesses. Families that are part of the scheme receive a free cow each on the condition that they agree themselves to later pass on a heifer cow to others in need.

Some 800 families will benefit from the program and in the first two years about 200 Holstein-Frise cows will be donated to Romanian beneficiaries from Zimnicea (Teleorman county), Cocorastii Colt (Prahova county) and Belin (Covasna county). Another two localities will be included in the program later. A Holstein-Frise cow can cost up to EUR 2,500, a prohibitive price for most of those included in the program, and it produces up to three times more milk than local breeds.

The families to benefit from the project are selected based on criteria such as income, experience in raising cattle and the means to provide proper feed. In addition to the free cow, beneficiaries are also trained how to properly take care of the animals and how to create producers’ associations. “Quality milk can’t be obtained by some of the, let’s say, primitive methods many small farmers still use. We will teach them how to properly milk the cows and some of them will receive milking installations. They will also learn how to properly feed the animals,” said Bogdan Ioachim, Danone Romania communication director.

While this project alone can’t solve all the problems, its goal is to get the ball rolling, says Danone. “We all know very well that in Romania there are about 800,000 families who own a cow or two. Our goal was to set an example to all those involved, including policymakers who can take measures for all these families that risk losing their income source after 2014. If these farmers learn how to produce quality milk and create producers’ associations, then they will survive after 2014. If they are not helped and are left to go on as they are today they will not. There is not much time left,” warned Ioachim.