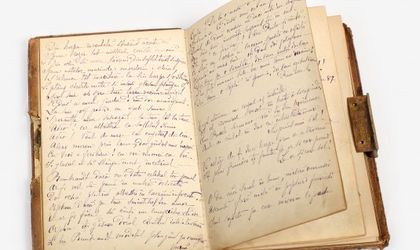 A rare manuscript containing the poem “Si daca ramuri” (And if branches) by Mihai Eminescu will be auctioned online by Lavacow, the local subsidiary of Artmark, on November 10, the company announced.

The manuscript, a notebook owned by a young lady whose name was not made public, contains the poet’s signature below the poem and also texts by Iasi politician George Scortescu and Duiliu Zamfirescu. Coming from the personal collection of Corneliu Vadim Tudor, the manuscript will be auctioned starting at EUR 950.

The pieces contained in the collection can be consulted at Cesianu-Racovita Palace, while the auction will take place exclusively online on November 10, starting at 20:00.

Lavacow is an online auction house dedicated to emerging European art. It organizes online-only auctions offering live streaming which allow participants to see each other and the auctioneer in real time. Lavacow is a subsidiary of the Artmark International BV, based in the Netherlands. The founding team is composed of the Artmark shareholders (Alexandru Baldea and Manuela Plapcianu) and Cristina Olteanu.