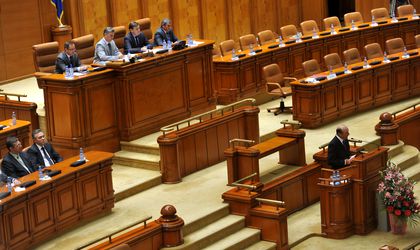 PNL president Crin Antonescu became interim president of Romania last week after Parliament suspended President Traian Basescu for breaching the constitution, but the shifting political sands of the last few weeks have raised concerns throughout the EU regarding the rule of law and the democratic practices of the country’s government.

PM Victor Ponta went on a two-day visit to Brussels last week to assure the EU heads that all decisions by the Constitutional Court (CCR) will be respected by the Romanian government and Parliament. The PM met with the president of the European Parliament, Martin Schulz, as well as the presidents of the European Council, Herman Van Rompuy, and European Commission, Jose Manuel Barroso. Ponta also met the leader of the Party of European Socialists, Sergei Stanishev.

Ponta told Van Rompuy that the political crisis in Romania should not be linked to the Schengen accession process, which would make the country the eastern border of the EU from September.

The PM said that Romania had fulfilled all the conditions to join Schengen and that the political crisis in Romania would be resolved on July 29, when the impeachment vote is held.

Although Ponta tried to reassure Brussels that Romania is respecting democratic practices and is not trying to attack the judiciary or organize a coup as the opposition PDL has alleged, the European Commission (EC) wants a clear picture of the country. The government will submit documentation to the EC in a bid to answer the questions raised by Manuel Barroso.

“The EC president came with a concrete set of questions, which the government will  answer tomorrow, when I return to Bucharest, which from my point of view will make it clear to the Commission and member states that the rule of law and rules and European standards are guaranteed,” said Ponta, last Tuesday.

According to Austrian newspaper Die Presse, PM Ponta hired PR and lobby agency G+ Europe, part of Omnicom communication group, which had as clients, among others Russian group Gazprom and the Russian government in order to help him save his image.

However, the answer of the government, sent to Hotnews.ro was that “at this moment, there is no contract signed between the government or PM Victor Ponta and consultancy firm G+. Yesterday, representatives of this company offered their support during teh dialogue with the media, in Brussels, but no contract was signed.”

The EU commissioner for justice, citizenship and fundamental rights, Viviane Reding, said she was concerned about the volatile political situation in Romania.

“The situation is the pressure put on the judiciary, the limitation of the jurisdiction of the Constitutional Court with all the implications this has and the removal of the ombudsman outside normal procedures. The ombudsman is the one who should fight corruption,” said Reding ahead of her meeting with the Romanian justice minister Titus Corlatean.

Romania’s political debacle escalated on July 6 when MPs voted to suspend Traian Basescu, after eight years in office. The president survived a similar attempt to oust him in 2007, winning a landslide victory in the impeachment referendum.

The German chancellor, Angela Merkel, had a lengthy conversation with the president last Monday to find out more about the political situation, said the spokesman of the federal government in a press release. Merkel described as “unacceptable the situation where the rule of law is breached in an EU member state,” adding that she would support the EU in taking all necessary measures. “I do not suppose that Mrs Merkel will vote on July 29,” responded Ponta.

Furthermore, the federal government summoned the Romanian ambassador in Germany. The Romanian official was informed that all the decisions of the Constitutional Court (CCR) must be published and implemented, especially the one regarding the presidential impeachment.

Last week the CCR ruled the impeachment referendum will be valid if voter turnout exceeds 51 percent of the electorate. PM Ponta asked Parliament in a letter to vote on the referendum law in an extraordinary meeting. MPs will vote next week to align the referendum law and the CCR’s decision.

The US ambassador Mark Gitenstein warned that Romania may slip into a “very dangerous constitutional crisis” if the referendum is conducted without the provisions of the CCR ruling.

Traian Basescu kicked off his campaign last week with the message that he is not defending his position, but a European Romania that he began building with the state institutions and the public eight years ago.

The political developments seem to have left economic concerns in the shade, but Romania has to continue an extensive reform program under a EUR 5 billion agreement with the IMF, World Bank and the European Commission.

“We have a stand-by agreement. It is still operational. The government was clear about it, so it is valid,” said Nemat Shafik, the IMF’s deputy managing director and acting chair, quoted by Reuters. “I think the political issues will be treated separately. We are concentrating on the economic program.”

Recent political changes in Romania “could adversely affect the economic stability and growth, and also the country’s image on the international markets,” warned Steven van Groningen, president of the Foreign Investors’ Council (FIC).