It happened on Sunday: Massive coordinated anti-Chevron protests all over Romania 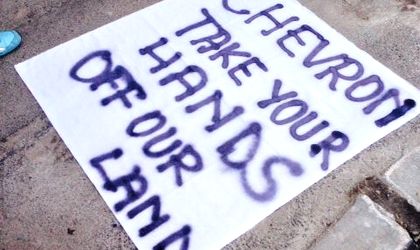 On Sunday, coordinated anti-fracking protests in 60 Romanian cities called for a ban on hydraulic fracturing, transparency in decision making, and for the Romanian government to respect the will of local communities. The weekend’s events followed months of protests beginning in Pungesti, a small village near the border with Moldova, but have spread as activists learned that fracking operations are planned or are already underway across Romania.

Over 150 NGO’s cooperated in organizing Sunday’s National Day of Protest Against Fracking, in 60 Romanian cities, and in several cities around the world with significant Romanian populations.

“Chevron US, you can’t just drop in uninvited and leave death in your wake”, read some banners and signs in Bucharest on Saturday, where hundreds of people gathered in the capital’s University square.

“We have seen the effects of fracking on the environment in the US and we do not want the same to happen here,” student Alexandra Paslaru said, quoted by Sky News.

Chevron has permits to explore for shale gas in northeastern Romania as well as on Romania’s Black Sea coast. Despite local opposition, the company has started to build its first exploration well in the village of Pungesti. Protesters also lashed at the government of leftist Prime minister Victor Ponta, who switched his position on the matter (initially being anti-shale-gas exploitation) after coming to helm the new Romanian government two years ago.