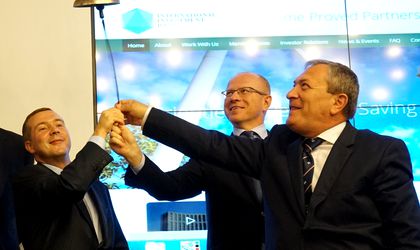 The bonds issued by International Investment Bank debuted on October 15, 2015, on the Bucharest Stock Exchange (BVB), company representatives say. The total value of the issuance is RON 111 million (EUR 25 million).

“We are glad that the supply of financial instruments on the Bucharest Stock Exchange becomes increasingly diverse. The IIB project proved to be a successful offering, also in terms of the time needed to complete the deal, which was fairly short. It can serve as a good example to other projects in the domain of debt instruments or equities alike,” said Ludwik Sobolewski, BVB CEO.

“This bond is not only IIB’s first local currency bond outside of the country of our headquarters, but it is also significant in two major ways. First, after Russia and Slovakia, Romania is the third country where we have committed ourselves to the development of the local capital market. In fact, this is the largest issue of any international financial institution on the Romanian market in the past 6 years. And secondly, as testified by our latest transactions, Romania has become one of the leading destinations for our investments and today’s bond will allow us to further support this growth of our operations in the country. In this sense, the IIB aims to channel the liquidity on the market to sustainable and socially viable economic activities,” stated Denis Ivanov, deputy chairman of the board, International Investment Bank.

The bonds issued by International Investment Bank were bought by 13 Romanian institutional investors. The lead manager of the offer was BT Securities, part of the Banca Transilvania financial group.

BVB runs markets for shares, bonds and other instruments, through regulated platforms and alternative systems, and provides a wide range of services to participants of financial markets. It is a public company, listed on its own market since 2010.