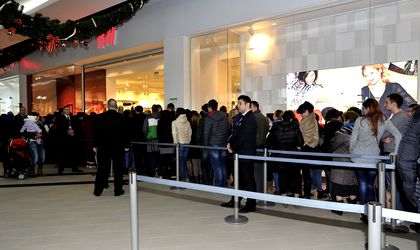 Swedish fashion retailer H&M opened a store in Galati today on the grounds of the Galati Shopping City mall, announced the company. This takes the retailer’s local network to 30 outlets.

The last two months have been busy for H&M Romania in terms of expansion. The retailer announced this September plans to open four new stores in 2013, three in Bucharest – the one in Lipscani area, another in Promenada Mall, another in IrisShoppingCenter- and a store in Ploiesti, reaching a total number of 29 stores countrywide.

After it opened eight new stores in Romania last year, Swedish fashion retailer H&M has reported sales worth SEK 635 million (approximately EUR 74 million) for the 2012 fiscal year (December 1, 2011 – November 30, 2012) up from SEK 335 million the previous year. Expressed in RON, sales were up by 107 percent.