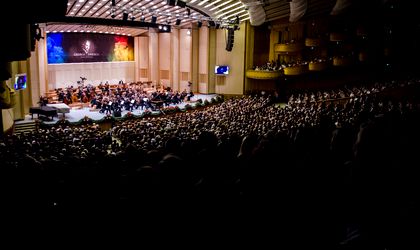 Seven orchestras found in Gramophone’s top 20 will perform on stage this year for the George Enescu Festival (August 30 to September 20, Bucharest).

Among these are the Royal Concertgebouw Amsterdam, the Berlin Philharmonic, the Vienna Philharmonic Orchestra and the London Symphony Orchestra, which occupy the first four places in the ranking.

The Berlin Philharmonic will hold a concert on September 3 at Sala Palatului under the lead of conductor Sir Simon Rattle. The orchestra will be present in Bucharest for the first time, following 15 years of negotiations. Royal Concertgebouw Amsterdam, “the orchestra with the softest sound in the world”, according to the critics, has taken part in three other editions of the event and the audience will enjoy their concerts during the last two days of the festival, on September 19 and 20. The orchestra will be led by Latvian conductor Andris Nelsons, an ascending musician covered by July’s issue of BBC Music magazine. The London Symphony Orchestra (September 8 and 9, Sala Palatului) will be led by Romanian-born conductor Ion Marin. In June, the London Symphony Orchestra welcomed the Enescu Festival audience in a special video message.

Meanwhile, a concert performed by the Vienna Philharmonic Orchestra on September 16 at Sala Palatului will mark a double premiere. Aside it first time presence in the festival, the soloist of the concert will be soprano Valentina Nafornita, who graduated from the National University of Music in Bucharest. Valentina Nafornita is a member of the Vienna State Opera.

Besides the four best orchestras in the world, other orchestras in the top 20 will be present in the 2015 edition of the Enescu Festival. Among them the Staatskapelle Dresden and San Francisco Symphony Orchestra (which won the Pulitzer Prize for Music), who will premiere Voix de la Nature, a piece by George Enescu.

Nearly 2,500 foreign artists and 500 Romanian ones are expected to join in the 2015 George Enescu Festival. Ticket prices range from EUR 36 to EUR 10.

This edition will host for 22 days 58 concerts at Sala Palatului and The Romanian Athenaeum, as well as several outdoor events organized under The Enescu Festival Square (September 3 to 20) and The Creative Bucharest.

The 2015 Edition includes three significant Romanian participations:  the National Youth Orchestra, which will open the Festival on August 30; George Enescu Philharmonic Orchestra and Choir that will perform in concert premiere the Opera Wozzeck by Alban Berg and the National Radio Orchestra together with the Radio Academic Choir that will interpret Mahler’s Eight Symphony.

20 works by Romanian composer George Enescu will also be interpreted.

The full schedule of the festival can be viewed here and details, live transmissions and other media can be found on their Facebook, Instagram and Pinterest pages.