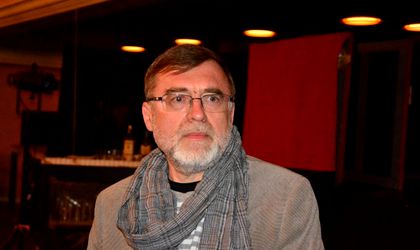 The first premiere of this year for Bucharest National Theatre will be staged Friday, January 22, by one of Romania’s top theatre directors,  Alexandru Dabija. The director will offer the public Requiem, one of the most impactful plays from Matei Visniec’s dramaturgy (in picture).

„Requiem marks the border between history and memory, where death appears to be impersonated by the Dead for their Homeland – worthy or unworthy – expressly claiming their rights to march at the homecoming parade. Under the close observation of the general, they are preparing for a triumphal march, with hundreds, thousands and hundreds of thousands of … defeated men, after a long war which, sad parable of history, does not appear to have ended until today. And … a struggle, this one endless as well, for the top position, is placed in the crater of a black comedy and emphasized with plenty of humour by a glamorous cast”, seems to be the performance’s description offered by Bucharest National Theatre.

Regarding the play, in a conference held by Matei Visniec on Sunday, January 17, the Romanian playwright said “it isn’t easy to convince Alexandru Dabija to choose one’s play. (…) Years ago, maybe four, I met him in a coffee shop and I brought him all my plays. I asked him to look around and see if he likes something. He enjoyed Requiem.  (…) I’m pleased he had chosen this text instead of others because it’s a journalistic reflection which I wrote, it’s something contemporary that it’s still under the influence of what happened during and after World War I”, explained Matei Visniec.

The music was created by Ada Milea, while the scenography is signed by Irina Moscu and the choreography by Florin Fieroiu.

The next performance will take place on January 30. Tickets can be bought from the Bucharest National Theatre box office.