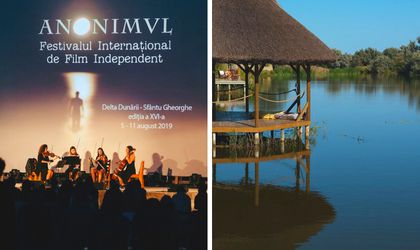 The film which premiered at this year’s Sundance Film Festival, The Father, a film co-written and directed by Florian Zeller, will open this year’s edition of Anonimul Independent Film Festival, set to take place between August 12 and August 16 in Sfântu Gheorghe, in the Danube Delta.

Due to pandemic restrictions, this year edition includes two competitions dedicated to short films, Romanian and international ones, and feature film screenings, followed by meetings and talks between the filmmakers and the public only in festival’s courtyard. A ticket in advance must be booked to attend the screenings.

The drama presented in The Father tackles the topic of dementia, starring Oscar winners Anthony Hopkins and Olivia Colman.

There is a reason why people are always coming back to the delta, when the festival unfolds, and they should discover the reason by themselves, Miruna Berescu, Anonimul Film Festival director

Probably the best experience of travelling in the world – travelling to Dobrogea, one of the Romania’s region with great sightseeing, then with a boat for one hour (from Murighiol) or kind of a five hours (from Tulcea), enjoying the Danube and delta. Basically, there is the end of Europe – the last piece of land.

The informal meeting with major figures from the Romanian film industry – directors, scenographers, actors, all of them are walking through the village and happily answering questions and taking pictures with fans.

They are organizing the festival in times of major culture crisis due to pandemic – and this is why they should be supported and encouraged.

The incredible merge between Danube and the Black Sea – you can actually swim there because the shore has a fine sand.

The sunrise from the sea – this is pretty amazing everywhere in the world, but even better here, in Anonimul, if you book in advance a boat and go see the sunrise from the boat. If you are lucky (as myself), you will see the hungry pelicans waiting for the natural light to go hunting for fish.

The under the clear sky film experience – the camping area is the place to be, while the screening is quite an experience. The only inconveniences are the mosquitos, but the scenery is breathtaking, so it will get used to it.

The fish meals – must try, must eat, especially because they have some local receipts and the fish is freshly fished from the sea or from the Danube. Egg fish also are a must. Won’t regret.