Teodorovici: OUG 114 will be changed next week through a new emergency ordinance 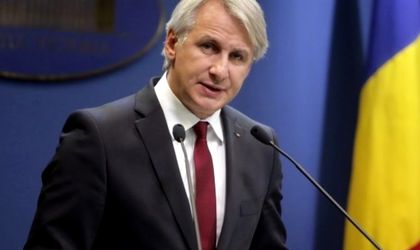 The government will bring changes to Emergency Ordinance 114/2018 next week through a new emergency ordinance – one of the main changes will be setting the ROBOR based on interbank and daily transactions from the previous quarter, according to Finance minister Eugen Teodorovici.

As he left an event organised by the European Commission, Teodorovici was asked by journalists about the status of discussions on amendments to OUG 114/2018.

“I cannot wait to be done with this ordinance,” he answered.

The minister stressed that the legislative act will be changed in the government next week, but the talks were not yet finalized.

“As you know, yesterday we had discussions with the Romanian Banking Association at the Finance Ministry and we will have a discussion today to go over the final text of the ordinance amending OUG 114. We of course also had discussions with the BNR, we also sent a briefing to the European Central Bank, showing what changes we were preparing through an emergency ordinance that will be approved by the government next week. It is mainly about decoupling the ROBOR from the tax side of financial assets. The new ROBOR will be calculated on interbank and daily transactions from the previous quarter, as an average applied for the next quarter,” said Teodorovici.

According to him, the changes are aimed at lowering Romanians’ bank instalments.

“These are calculations from the BNR. Our intention is to lower the cost of financing for Romanians and it is clear that there is a difference between the quotation-based ROBOR and the one proposed for transactions, as stated in the draft law. We are talking about a decrease – I cannot say how big it is, because it varies, it is an average, but it is definitely a decrease, this is our main goal,” added the government official.

Another change announced by the Minister of Finance is linked to banks’ taxable assets, where government securities, local authorities loans and government programs were removed.

Regarding the provisions of the OUG 114 on the energy sector, namely the gas price cap and the 2 percent contribution to the turnover, Teodorovici pointed out that there is still talks on the application or not on 1 April and that, if all the parties agree, these provisions may change next week.

“We had a discussion with the ALDE on the energy side and also saw a letter from the European Commission, there were talks with all the partners in the market and of course with the European Commission on the subject. If things are clear in the gas area, these provisions will be on the next week’s ordinance, as well as those for the communications sector,” said the minister.

With regard to Pillar II pension funds, he indicated that the deadline could be extended.

“As far as pension funds are concerned, we had a discussion with the fund managers yesterday, and today we should receive in response to what we discussed yesterday. If what has been discussed is agreed, then we will have to make a decision by the end of March, because otherwise the effect will occur. There will surely be a change related to the second pension pillar in this ordinance, but in the sense that it may extend the term of applicability of OUG 114, a very short-term prorogation, to allow more time for technical discussions,” said Teodorovici.

The minister was asked if those who manage private funds could come up with a smaller contribution to increasing their capital if they invest in state projects.

“They were interested in this issue and sent a few documents and would be willing to invest in any project that the state launches, from transport infrastructure, to hospital, anything that is of interestdor these investment funds. The state projects are surely safe projects that will bring profit,” said the head of Finance.

Teodorovici also said that the draft of the new ordinance, which will amend OUG 114, could be launched in public debate during Friday.