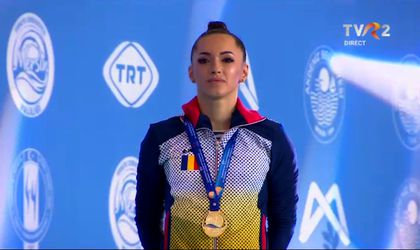 The Romanian artistic gymnast Larisa Iordache came back in the high level competitions after three years of break, due to injuries, with a great performance. Iordache won two Gold medals on balance beam (14.000) and on floor (13.450) and two Silver medals on vault (13.875) and with the team, and the fourth place on Bars at the Women’s European Artistic Gymnastics Championships in Mersin, Turkey.

Iordache, world all-around silver medalist in 2014, returned to international competitions after three years out due to an Achilles tendon tear and took her success to 16 European Championships medals. She is surpassed only by Svetlana Khorkina with 20. The floor Gold medal represents Larisa Iordache’s third European title on floor, after winning in 2012 and 2014, while on beam she won her second title, after the 2013’s edition.

Romania has now won 55 gold medals at the event, matching the record tally of the Soviet Union.