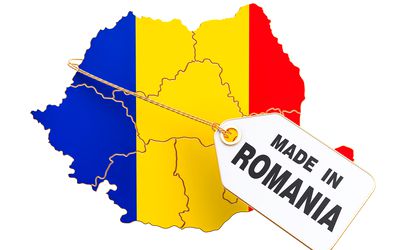 Romanian companies have started to conquer foreign markets. From decades-old brands such as Dacia or Gerovital to new companies like UiPath or UNTOLD, these have become some of the best known brands in the world in their respective industries. Through their popularity, Romania has secured a place on the map of countries that produce global companies.

The Dacia plant produces about 350,000 cars annually, most of which are exported to 44 countries. The Dacia Duster SUV is the best-selling SUV in Europe. Currently, France is the largest export market for Dacia cars, followed by Germany, Italy, Spain, Romania, Turkey, Morocco, Algeria and the United Kingdom. Next year, production is expected to grow to over 400,000 cars per year. According to the latest estimates of 2019, the brand is worth about EUR 1.32 billion.

Exports account for almost 97 percent of Bitdefender’s turnover. In 2017, the company’s exports totalled about RON 578 million. Founded by the Talpes spouses, the company was established in 1990 with USD 300. Today, over 500 million people around the world have used BitDefender antivirus software.

Known as “the queen of Hollywood eyebrows,” Anastasia Soare has built a true beauty empire. Last year, Forbes magazine wrote that the Romanian is worth USD 2 billion, and she recently doubled her fortune after selling 49 percent of the company to the Sephora brand, after a few years of direct collaboration. Before this transaction, about six months ago, Anastasia Soare concluded a partnership with an investment fund, which, in exchange for a package of shares, will ensure the brand’s entry onto the Asian and European markets.

A Romanian, the founder of a startup, has become the first billionaire in the business of software robots. That was programmer Daniel Dines, the founder of UiPath, who was on the September cover of the US edition of famous Forbes magazine. His company is valued at USD 7 billion, which that means that Dines, who owns 20 percent of the company, has a net worth of at least USD 1.4 billion.

Read more about: What are the duties of a brand ambassador? Brand Ambassadors represent the face, the voice, and the attitude of a brand to its customers. An ambassadorship is a job made for individuals who love meeting and interacting with people. Brand ambassadors are enthusiastic about sharing their brand insights and opinions with the world, both face-to-face and through social media with the help of online content and marketing.

This year, the Cluj-Napoca music festival reached its fifth edition. The DJ Mag publishing team organizes annual polls dedicated to the music industry, and this year they created a new ranking, where 100 of the best DJs in the world chose their favorite festivals. The good news is that in the “Top 50 most important festivals in the world”, UNTOLD ranked 8th, along with other well-known events such as Ultra, Coachella or Glastonbury. In 2018, the organizers spent EUR 16 million for an impressive production and line-up. Over 370,000 people worldwide experienced the UNTOLD experience this year. For 2020, the organizers promise new surprises. In fact, the festival is so beloved that the first 17,000 tickets put up for sale in two rounds were sold out within 5 minutes.

Three continents, 12 countries, 70 restaurants and 3,500 employees. This is the performance reached by Salad Box, the business founded in Cluj-Napoca, in 2012, by Dan Isai and his family. The most successful Salad Box restaurant is in New York, where Americans queue daily to order salads with recipes which are “made in Romania”. In 2018, the group of companies controlled by the entrepreneur reached a turnover of about 60 million euros.

Carpathian Springs, the manufacturer of Aqua Carpatica, has expanded to the UK, and the Romanian mineral water brand is now available in 500 WHSmith stores nationwide. Aqua Carpatica, a brand created in Romania by the Swiss entrepreneur of Greek origin Jean Valvis, has also arrived at Tesco stores in the United Kingdom. In addition to the UK, the company exports the Aqua Carpatica brand to Japan, China, all Gulf countries (United Arab Emirates, Qatar, Kuwait, Bahrain, Saudi Arabia, Oman), Russia, Moldova, Germany, Hungary, Spain, Australia and Finland. The company ended 2018 with a net profit of about RON 53 million, about 50 percent higher than in the previous year.

The history of Gerovital begins with the discovery of the first anti-aging formula in the world, called Gerovital H3, by Prof. Dr. Ana Aslan. In 1967, the first Gerovital H3 cream was made in Farmec laboratories. Currently, the Gerovital brand brings together 18 ranges for skin, hair and body care, aimed at all types of consumers. Gerovital products are present in approximately 30 countries around the world, enjoying international fame. 8 out of 10 products in the company’s portfolio that go to export are Gerovital products. The brand is present in over 30 countries, such as: Japan, Spain, Italy, Portugal, Czech Republic, Norway, Croatia and the USA. In the evaluation of Superbrands Romania, of a total of 1,560 brands analyzed, Gerovital obtained the title of Superbrand 2019, which in fact it also held in 2015 and 2017. Gerovital obtained the title of the most powerful Romanian brand in 2019 as well, according to the BrandRO ranking.

One of the biggest Romanian accessories brands, Musette is a family business founded by Cristina Batlan, with a turnover in 2018 of 18 million euros. Musette currently has 15 stores in Romania, USA, Israel and Bulgaria. The company plans to expand its operations to Luxembourg, Russia, Germany, France and Italy.

Nystatin produced by Antibiotice is sold in over 100 countries on all continents, reaching a share of over 50 percent of the world market. It is also present with substances and finished products in over 70 countries, and its strategy for the coming years is to “conquer” the Nordic states. Recently, the company has focused on expanding its business in the US. Antibiotice started developing a project for the United States and Canada markets in 2006, which consists of the export of injectable drugs. The first orders for this drug were worth EUR 2 million. Exports represent 20 percent of the turnover, but the company plans to reach 40 percent in the coming years.