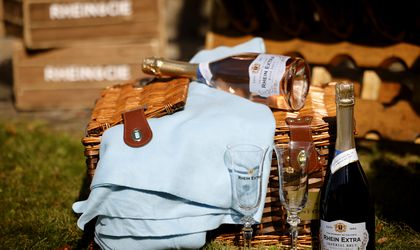 Alexandrion Group, the biggest producer and distributor of spirits and wines in Romania, celebrated 130 years since the establishment of Rhein Cellars & CIE Azuga 1892, through an event organized on October 15th, 2022, on the centenary day of the Coronation of King Ferdinand I and Queen Marie. Official supplier of the Royal House of Romania since 1904, the sparkling wine Rhein, produced at the Rhein & CIE Azuga 1892 Cellars, was served at the dinner that followed the coronation ceremony in Alba-Iulia, on October 15th 1922.

Dr. Nawaf Salameh, Founding Chairman of the Alexandrion Group said during the event organized in Azuga: “This year we are celebrating 130 years since the Rhein family laid the foundation of the Rhein & CIE Azuga 1892 Cellars. In 1886, when Wilhelm Rhein, the first of the three Rhein brothers, arrived in Azuga, this area was almost deserted. Only 14 years later, this place was talked about with admiration at the Universal Exhibition in Paris. King Carol I, who understood the extraordinary potential of the area, was the engine of this rapid modernization process. The industry of Azuga rose with his direct support. Rhein brothers developed an industrial empire, and their descendants continued the work. Today we are here due to them and we honor the founders. I am proud that Alexandrion Group can continue the tradition of the Cellars and the quality of the sparkling wine Rhein, with respect for the founders and the determination to increase the notoriety of this brand even more.

We have kept the traditional recipe that brought international success to the sparkling wine, but at the same time, we are constantly investing in the modernization of this location, of the production line, in order to maintain the quality at the highest standards. From time to time we make visual identity changes so that the image of the product remains fresh and relevant. Through everything that we develop here, I want Alexandrion Group to connect the past and the present and shape the future. “

To mark this important moment for the Rhein & CIE Azuga 1892 Cellars, the historian and doctor of history of the University of Bucharest Dorin Stănescu has recently launched the book “The champagne of Kings – A history of the first champagne factory in Romania. Rhein & CIE Cellars (1892 – 2022)”, an in-depth research effort, reflected in a monograph that reveals the elements that led to the success of the sparkling wine Rhein and the unprecedented development of the newly industrialized towns.

130 years after their establishment, the Rhein Cellars & CIE Azuga 1892 have preserved the charm and sophistication that this complex had at the end of the 19th – beginning of the 20th century. The cellars have a continued tradition in sparkling wine production, by the traditional method, with secondary fermentation in the bottle, a very meticulous, complex and well-controlled process, in which the base wine, the time and temperature of fermentation are essential. The domain includes cellars built above the ground where guided tours are organized, a museum that documents every important moment in the history of the place, a guesthouse with accommodation facilities for those who want to stay overnight in the area and a restaurant where visitors can enjoy the royal menu, a reinterpretation of the menu that the Royal House of Romania enjoyed in those days, complemented by the Rhein Extra sparkling wine.

The oldest Romanian brand of sparkling wine, Rhein is known in history as the sparkling wine of kings, the elite and the historical events from 1900-1948. Its outstanding qualities were recognized only a few years after the beginning of the production. In 1905, Rhein won the gold medal at the Colonial Exhibition in London, in 1929 at the General Exhibition in Barcelona, ​​in 1935 at the one in Brussels, and today it continues to win medals at international competitions around the world, such as the International Wine Challenge, International Wine & Spirit Competition, Decanter World Wine Awards or Vinarium.

The book of honor of the Rhein & CIE Azuga 1892 Cellars is living proof of the appreciation and joy of those who discovered in Azuga a rare space with history and continued tradition. This place offers unique experiences to the travelers who follow in the footsteps of the four kings of Romania who often visited the Cellars. They are privileged witnesses of the history of the area where the modernization process of the Old Kingdom began.