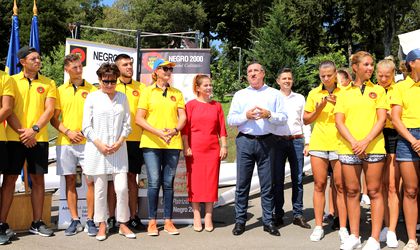 The Romanian rowing champions, awarded at the European Championships in Glasgow were celebrated at the National Sports Complex in Snagov, during an event hosted by Elisabeta Lipa, the president of the Romanian Rowing Federation.

Romania finished the European Rowing Championships in Glasgow in the first position, ahead of France, Italy, Switzerland, Norway, by winning 7 medals: 3 Golds, 2 Silvers and 2 Bronzes. The 3 Gold medals went to: the women’s pair, the men’s four and women’s eight. The 2 Silvers went to: women’s four and men’s double sculls, while the 2 Bronze medals to: the men’s pair and men’s eight. This represents a historic performance for our country.

The sportsmen were congratulated by Ioana Bran, the Youth and Sport Minister, and by Mihai Covaliu, president of the Romanian’s Olympic and sports committee.

“I am extremely happy for their exceptional result. My pray is that you would look more to this field and these special and professional people, in order for us to be able to perform,” added Elisabeta Lipsa, while addressing Ioana Bran and the participants.