Save the Children, Kubis and Romanian starts are saying #FaraUraPeNet 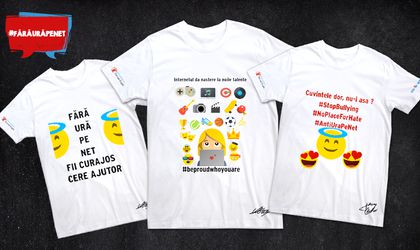 Children’s favorite artists get involved in 2017 as well in Save the Children’s path of educating the small and medium publics about the online perils. At Ora de net (The net hour), the children are invited to create messages of resistance against the cyberbullying and the artists are promoting the most creative ones through a collection of t-shirts #FaraUraPeNet (Without hate on the Internet).

Kubis launched the campaign Se poartă #FărăUrăPeNet (#WithouthateontheInternet is in fashion) through a social media challenge via the ambassadors Alina Eremia, Mircea Erimia, Ami, Andrei Leonte, Ana Baniciu, Liviu Teodorescu and Zmenta. The seven cause’s supporters shared, through video interventions, on their Facebook pages, part of their online harassing personal experiences, in the communities they are handling as public persons.

The ambassadors’ stories opened the creation contest in which have already entered over 1000 children and teenagers all over the country. Their positive messages #FaraUraPeNet are integrated in t-shirt designs, through thematic emojis and the ambassadors’ preferred one will be produced on t-shirts signed by every artist.

“We continue, the second year in a row, to promote an usage of the Internet that will allow all the children a pleasant and secure digital experience. The results obtained from the most recent research Save the Children on this theme showed that the bullying maintained itself at a high level, 73 percent of the children saying that they were witnesses of a situation that entered in the harassing pattern in the scholar environment and 69 percent identified it in the online environment,” said Gabriela Alexandrescu, Executive President of Save the Children Romania Organization.

Ora de net (The Internet Hour) represents a unique European program in Romania that promotes the safety on the Internet for children and teenagers. Safe the Children has been running in Romania since 2008 and during this time were included in the activities over 260.000 children and 76.000 parents and teachers.