Logofatu brothers, owners of Bittnet Systems, sell 14.3 pct of shares to keep up the free float 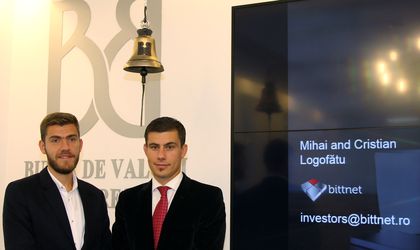 Bittnett Systems founders and main shareholders Cristian and Alexandru Logofatu sold a pack of shares totalling 14.35 percent of the company. The transaction valued at RON 8.05 million, was made with the partners from Crescendo and it is meant to keep the free float on Bucharest Stock Exchange (BVB) at a good level and share the risk with partners from Crescendo.

The transactions were made at RON 1.085 per share and it included a total of 7.423 million shares, of which 3.86 from Cristian Logofatu and 3.56 from Mihai Logofatu. The buyers were the shareholders of Crescendo International, a total of 6, the main shareholders being Marius Tulea (36.58 percent of Crescendo), Corneliu Vladu (28.42 percent) and Cristea Cornel (12 percent).

Bittnet and Crescendo decided to unify their activity in order to increase the force of selling and services development, but the deal did not include any transfer of assets. The Crescendo team was integrated in dendrio, a company from Bittnet group.

“In addition, we will address the personnel risk through a plan to align the interests of Bittnet Group’s existing shareholders with those of key people from the CRESCENDO team. In this respect, CRESCENDO shareholders at the time of the transaction will acquire Bittnet shares totaling more than RON 8 million. In this way, the total alignment of interests is achieved, as well as the desire for key people to have “skin in the game”. In other words, if the investment is successful and has a positive evolution, everyone has to win. Instead, if the investment does not evolve as expected, the key people (CRESCENDO shareholders) will register the same exposure with Bittnet shareholders – “paying for” essentially for lack of performance,” said the Bittnet founders.

The decision to sell the shares owned by Logofatu Brothers was taken and communicated at the time of joining Crescendo.

“There is a risk of diminishing the “free float” or distorting the BNET on the stock market due to the plan to align the interests of Bittnet with Crescendo.  To eliminate this risk, but also to support the increase (not decrease) of the free-float of BNET shares – in the perspective of migration to the main market of Bucharest Stock Exchange, founders of Bittnet have agreed to diminish their stake in the selling shares to CRESCENDO shareholders – key people. This means the percentage jointly owned by founders Bittnet, Mihai and Cristian Logofatu, in the company, will fall below 50 percent. Reaching this threshold was already awaited for some time, given the rapid growth of the business, as well as the effort founders to significantly develop the company by diminishing their holdings in exchange for the necessary capital to increase and increase the volume of free-float. The founders of the company remain committed to it and will continue to develop the business to become one of Central Europe’s most representative IT & C players and East,” says the Bittnet official paper.

Mihai and Cristian Logofatu controlled a package of 53.85 percent of the company shares prior to the transactions. Now they own less than 40 percent of the shares.

Study: The participative leadership style and the cultivation of social and communication skills,...