Isopan Est reached a turnover of EUR 21 million and production rises to 1.3 million square meters in the first half of the year 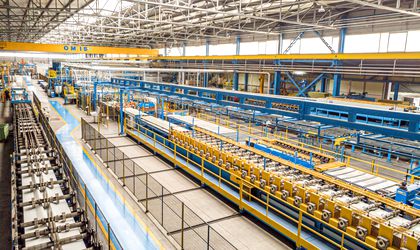 Isopan Est, the largest producer of thermal insulation panels in Romania, part of the Italian group Isopan, registered a 6% increase in production volume in the first half of the year, reaching a total of 1.3 million square meters of panels produced at the Popeşti-Leordeni factory. At the same time, the company’s profitability increased by 80%.

The increase in production was, on average, constant during the first six months of the year, except in April when, following the establishment of the state of emergency at national level, construction companies had to focus more on operational objectives and ensure the proper functioning of construction sites and their employees safety.

The activity and orders flow recovered after April, registering a slight increase compared to the same period last year. At market level, in the first half of the year, major projects continued, with construction companies working more for industrial, logistics and warehousing spaces. We have also noticed a trend among large investors to move towards high quality construction materials and thermal insulation panels, without prioritizing the price in their choice, especially when the decision is made directly by the beneficiary.

In the current context, the pandemic has put pressure on trade links, on the flow of goods, emphasizing the importance of logistics planning and industrial spaces.

“The first six months were months of growth, even in the pandemic context, although April had a completely different pace in the market compared to other years, and the most important thing is that we managed to work safely and deliver orders in a normal pace for our partners. It is clear that few things will work as planned this year, so we are pleased to see that there are serious, mature investors who see these investments as a way to reduce the effects of such a crisis in the future. Currently, we are involved in logistics and industrial projects, where the quality level of products used in construction is constantly increasing, and we estimate that these areas will continue their planned development”, said Toni Pera, General Manager of Isopan Est. Considering the production of 2.7 million sqm of thermal insulation panels forecasted for this year, Isopan Est produces about 18% of the total volume of panels made by Isopan group. About half of the production of Isopan Est made in the first six months of the year was exported to markets in the region, in Moldova, Bulgaria, Serbia, Slovakia or Hungary, keeping a similar proportion to that of 2019. More than 70% of the demand for thermal insulation panels, both for the domestic market, as well as for exports, it is for panels with above average quality, made of steel with a thickness of more than 0.5 mm.

The trend is due both to the requirements and regulations imposed by law in the field of construction for fire resistance of the buildings, and to the fact that projects increase in quality, as beneficiaries observe in practice the advantages of a construction built with this type of panels. Sustainability is for Isopan Group an integrated component of the business plan, an approach that allows long-term development, in harmony with the social and environmental context in which the company operates. The goal of sustainability is at the heart of innovation and is the element that allows synergies in the use of Isopan products, by combining the properties of thermal insulation panels with the Leaf technology, which offers low thermal conductivity, or with technology incorporated in the Arkwall ventilated facade system or the GreenROOF system.

At the same time, in the first six months of the year, Isopan Est registered a turnover of over EUR 21 million and an 80% increase in profitability.

“We see that the field of industrial construction works and there is potential for investment in this direction, so we are optimistic that the market for thermal insulation panels will not decline this year, but will maintain its upward trend,” added Toni Pera, General Manager of Isopan Est.

The company estimates that business and production volume for the current year will remain at least at the level recorded in 2019, with the possibility of an increase of several percent depending on market dynamics in the third quarter of the year. Similarly, estimates of the overall evolution of the market indicate a volume of about 8 million square meters of thermal insulation panels, the same as last year.