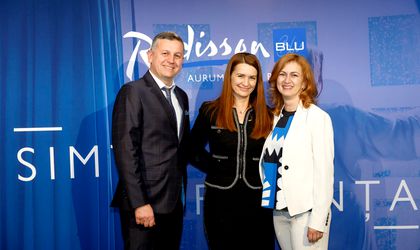 The Radisson Blu Aurum Brașov hotel had an occupancy rate of 70% in the first month. 80% of the guests who stayed in the hotel were Romanians, who paid an average of 165 euros per night for five-star accommodation and services in the center of Brașov.

Located in the heart of the city, Radisson Blu Aurum Brașov opened in October, after an investment of 17 million euros, on the site of the former Palatul Telefoanelor building on Bd. Eroilor in Brașov. The old building, built in the 1930s and in an advanced state of disrepair, has been rehabilitated and transformed into an attractive destination that integrates visual elements and stories from the city’s history in a sophisticated space with premium design and services.

With an experienced team of 70 people, the hotel already attracts tourists from the United States, Great Britain, the Middle East or Germany, but also a large number of Romanian tourists who visit Brașov for business or leisure.

With 110 elegant rooms, a restaurant with Asian eclecticism, a tasting room that accomodates a 400-year-old fragment of the old citadel of Brașov, an executive lounge with a panoramic view, a conference room with a capacity of 170 people and wellness facilities , the Radisson Blu Aurum Brașov hotel is a destination that combines contemporary design with premium finishes, harmonized with details from the history of Brașov. 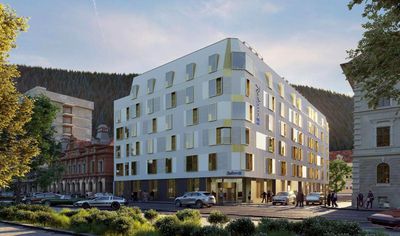 Read more about
Radisson Blu Aurum Hotel opens in Brasov in October, after an investment of EUR 16.3 million
read more

Impact of millions of euros in the local community

The Radisson Blu Aurum Brașov hotel is built by local entrepreneurs Ramona and Răzvan Neamțu, owners of the Ra-Ra Group. The family of entrepreneurs from Brasov wanted to develop a project with a significant impact in the local community, and the Radisson Blu franchise came with the necessary tools to create a local atmosphere, from the perspective of design and suppliers.

Therefore, for the construction and fitting out of the hotel, almost 80% of the investment was made with Romanian contractors and manufacturers. After opening, the hotel maintains the desire to support the local business environment and integrates suppliers from the area in the procurement of raw materials for the restaurant and supplies.

We wanted to have a local footprint as visible as possible, to bring details with historical value and to work with as many Romanian suppliers as possible, so that our guests discover not only a hotel with extraordinary design and services, but also a part of Brașov – past and present. Almost 80% of what Radisson Blu Aurum means is the result of the work of some companies in our area, which means that more than 10 million euros that we have invested have already returned to the local economy. In addition, the impact of a 5-star hotel in the community is very large in the long term, because it brings valuable business to the community. The tourist who pays 150-200 euros per night’s accommodation will spend an approximately equal amount in other services outside the hotel. So I’m glad to think that next year our investment will bring not only 6.5 million euros in the turnover of the hotel, but even more for the local business environment – says Răzvan Neamțu, owner of Radisson Blu Aurum Brașov together with Ramona Neamțu.

Past and future, in an investment for generations

The hotel was built with the objective of becoming an attraction in itself in Brașov. The wall of the old fortress discovered in the basement has been enhanced and is also visible from the outside, through a glass ceiling. The entire design of the hotel combines visual elements specific to the citadel and the goldsmiths’ guild, which inspired the name and concept of Radisson Blu Aurum.

We were actively involved in every detail of the hotel, to create a setting that combines history with contemporary style in a unique way. For the images in the rooms, for example, we worked with a fashion designer to create a unique dress, inspired by the towers of the Brașov fortress, and we reproduced jewelry in the style of those manufactured by Brașov goldsmiths in the 19th century. XVI. When we discovered the fortress wall during the works we decided to modify the whole project to enhance it and make it accessible to tourists. Almost every corner of this hotel can tell a story, and the stories are what will increase its value over generations – says Ramona Neamțu.

A total investment of 17 million euros was required for the opening of the Radisson Blu Aurum Hotel in Brașov. The construction work lasted 34 months, being hampered by the complexity of the project, the pandemic and socio-economic context. Estimates show that the investment will be recouped in about 10 years

Romanians are looking for 5-star experiences: in October, 80% of hotel guests were Romanian

In the first month of operation, in the Radisson Blu Aurum hotel, the first hotel with an international brand in the center of Brașov, 80% of the tourists were Romanian. For the first year of operation, estimates show an average occupancy rate of 65-70% and an equal split between Romanian and foreign guests. Accommodation prices start at 125 euros/night, but the annual average will be 165 euros/night.

Regardless of nationality, our guests seek service of an exceptional standard of quality, and the Radisson Blu franchise and everything our hotel offers supports this philosophy of personalized, superior service. The Artis restaurant offers a sophisticated menu, the rooms combine technology with classic elegance and historical inspiration. We aim for Brașov to become a renowned destination for both Romanian and foreign tourists – says Anca Cristea, General Manager of Radisson Blu Aurum Brașov, an executive with 18 years of experience in the Romanian hotel industry.

In addition to accommodation, among the five-star experiences that tourists can access at Radisson Blu Aurum Brașov are wine and whiskey tastings in the tasting room and in the skybar with a panoramic view, visiting the wall of the Brașov fortress discovered during the works and put into use in the basement lounge of the hotel, as well as relaxing in the wellness and massage area.

For the business environment, the hotel offers the conference and event hall and the executive lounge, which can accommodate management meetings or creative meetings.

For the winter of 2022-2023, in the context of proximity to the most popular ski area in Romania, Radisson Blu Aurum offers accommodation packages complete with sophisticated experiences. The hotel provides a transfer to Poiana Brașov for ski enthusiasts, and on Christmas and New Year’s Eve organizes culinary and artistic experiences.