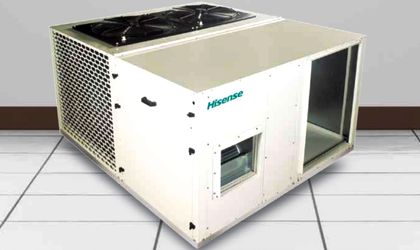 MIT Clima, a company with a 9-year presence in Romania, introduced in April the air conditioning brand Hisense and in Romania. The company estimates that Hisense contributes with 35 percent to this year turnover. Over two thirds of Hisense projects came from the commercial and industrial area – office buildings, hotels, but also a project in progress for a logistics park.

“The estimates for 2019 are very good, with Romania already ranking 3rd in Europe, in terms of sales, after Poland or Germany. Other markets in the area, important for Hisense Air conditioning are Bulgaria, Serbia and Turkey. We focus in particular on spaces for offices, hotels or commercial networks. In Romania, we want long-term partnerships and we estimate sales growth of 20% for next year,” explains Shane Dong – Regional Director of East Europe, Overseas Business Department.

The most important sales for the Hisense brand come from the Capital area (45 percent) and the Cluj – Timișoara area (35 percent).

For the next year, MIT Climate aims to increase the number of projects in the commercial and industrial area, targeting the eastern part of the country.

Last summer was a good season for the Hisense residential range. Over 70 percent of the sales volume comes from the Bucharest and Constanța areas, and the customers focused in particular on the economic solutions in the Hisense range. Plans for next year are considering expanding collaboration with DIY networks, but also increasing sales in cities such as Cluj, Timisoara and Iasi.

“For the current year we estimate a turnover of about EUR 13 million, an increase of 15 percent compared to 2018, due in particular to the inclusion of Hisense in the portfolio of MIT Clima. By partnering with Hitachi, Hisense uses Japanese technology for all its air conditioning products. The success of the Romanian market is due to the fact that Hisense offers consumers technology at an average price. Hisense range is aimed at the mainstream market segment, because price remains the most important criterion for choosing the products, both for the final consumer and for the project developers,” says Dan Stoica, General Manager of MIT Clima.

For the Romanian market, MIT Clima brings the full range of air conditioning units. The appliances in the residential range (RAC) as well as those for commercial (PAC) or industrial (VRF) projects use the R32 refrigerant which, due to the low global warming potential (GWP), protects the environment. The air conditioners work with low energy consumption and have 4 in 1 filters that remove dirt from the air, dust, pollen, pneumobacillus and unpleasant odors, but also a low noise level. Also, there are BIM libraries for all the products in the portfolio.

MIT Clima has one of the most complete stocks of products and the most efficient delivery in Romania, through over 100 partners covering the whole country. It also offers customers an extended warranty of up to 5 years for all products, when fitted with its partners. Besides the Hisense brand, the company also has two other powerful brands in the portfolio, with a reputation on the Romanian market – Mitsubishi Electric and Climaveneta.

MIT Clima’s most important projects include: KFC restaurants, Banca Transilvania headquarters, Coca-Cola factory, Continental factory, Sema Park Industrial Park, MOL gas stations or Mega Image stores. With a team of over 30 employees and 100 distribution partners nationwide, MIT Clima is one of the main players on the HVAC market in Romania.

Hisense Group registered a turnover of USD 15 billion in 2017, and currently owns 16 factories in several countries and 12 R&D centers. Hisense products are sold in over 130 countries. The Chinese company has over 75,000 employees worldwide. In 2015, Hisense purchased a factory from Sharp together with the right to use this brand in North and South America. In 2017, the Chinese company buys the TV division from Toshiba, and in 2018, the European Commission approves the acquisition of the Gorenje group.