The first research that evaluates the psychosomatic effects of longing (“dor”), a condition that affects over 10 million Romanians 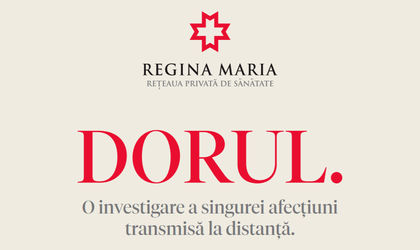 REGINA MARIA, the Healthcare Network launches the results of an extensive research on the psychosomatic effects of longing and homesickness on the communities affected by migration. The results illustrate the most frequent symptoms of longing – the only condition transmitted at a distance: decreased sleep quality, increased heart rate, muscle tension or intense anxiety.

“At the initiative of REGINA MARIA, we started an extensive research to explore and reveal the symptoms of longing and the impact it has on the lives of those abroad and the communities left behind. Based on the results of the study, longing can be associated with a condition, which occurs after a sudden separation of the individuals from their familiar environment and can destroy the true meaning of other things in life. It sometimes leads to somatization, causing the development of a certain pain or disease. We can therefore look at longing as a condition that acts in silence. Especially nowadays, when health has become a primary concern and relationships have been reshaped, sometimes completely. Eventually, the care for health, in every aspect, has become significant for the stability of these two worlds – those abroad and those left behind, in an increasingly uncertain and precarious context”, explains Alexandru Dincovici, anthropologist and professor at S.N.S.P.A.

Conditions and symptoms evolve and keep up with the people and the times they live in. Over 5 million Romanians have gone abroad from the first waves of emigration until now, leaving behind at least as many people affected by longing. The magnitude of the migration phenomenon in Romania calls attention to a certain degree of somatization, examined and defined in collaboration with the anthropologist Alexandru Dincovici.

Even though each person defines and feels it differently, for most respondents longing is a feeling they almost constantly assign to others. It is felt differently depending on the quality and intensity of family relationships of those who left, but also depending on how the family reconfigures due to leaving the country.

The study is based on two main analysis methods: a quantitative research based on an online questionnaire and important qualitative data collected from interviews with Romanians living abroad. The results of the research explore the somatization of longing experienced by Romanians settled abroad and the concern they felt for those who stayed behind.

The quantitative research was based of an online questionnaire answered by 733 people, more than half of whom left Romania more than 10 years ago and live 2,500 km away from the country they call “home”. Symptoms associated with longing, which are considered very common among the respondents, are: knot in the stomach (54%), knot in the throat (51%), sleep issues (50%), increased pulse (49%), and muscle tension (48%). As for the intensity and of longing and how respondents define it, 49% say they do not feel whole without their loved ones.

In addition, 20% of respondents perceive longing as a permanent feeling of sadness or loneliness. “I feel like I constantly want to take the first plane home, then I realize I can’t do it and that leads to a few days of depression and panic attacks” – declares a participant in the qualitative research during the in-depth interviews.

According to the report, longing often leads to neglecting health through precarious nutrition or unhealthy lifestyle, which can have actual consequences on the body over the years.

“Longing can often transform into temporary sadness, which decreases in intensity over time, or it can turn into direct symptoms and actual somatizations with a major impact on health. Such a manifestation can have similar effects and repercussions as any other disease,” adds Dan Dimitriu, Medical Director, REGINA MARIA Polyclinics, Bucharest.

Another important “symptom” exposed by the respondents is the concern felt for those left in the country. The main argument is that those living at a distance often feel responsible for the other family members. In this context, a health incident is their main concern and it can cause guilt, especially in the context of current health crisis caused by the pandemic, at global level.

Migration also makes people’s access to health more difficult, both for obvious reasons such as limited access to health services without citizenship or the lack of health insurance, but also due to language barriers, as reinforced by the respondents’ statements.

“I did not accept to be hospitalized until I’ve learned the language. Of course, in the end, you’ll find a way of communicating. Either you take someone with you who knows the language, or you communicate by signs. However, this is not very comfortable, I prefer to get in touch with someone who knows my language,” says another respondent.

Either not knowing the language of the country of residence or not knowing the specialized terms enough, but also because most of the respondents admit that in matters of health they prefer to communicate in their native language, interaction with healthcare professionals is perceived as easier and transparent in the language they best identify with.

“Even if longing is not something tangible, it often translates into clear symptoms, with possible impact on a mental and physical level. We chose to investigate this in order to relieve suffering. Through the DOR medical subscription, we ensure the access of Romanian patients abroad to the highest quality medical services and to well-trained doctors, wherever they are located.” said Andreea Minuță, Executive Director, REGINA MARIA Subscriptions Division.

The first response to the needs of Romanian patients worldwide

In May 2021, REGINA MARIA Healthcare Network launched the first medical subscription dedicated to patients abroad, supporting and strengthening access to quality medical services and Romanian doctors. DOR subscriptions for those abroad (“Dor pentru tine”)offer prevention services through free online consultations and check-ups in the Virtual Clinic, which can also be used in REGINA MARIA locations when Romanians return to the country, for a series of tests or investigations at a discount. DOR subscribers can also purchase the “DOR pentru ai tăi” package, so that their loved ones who are in the country can have access to the proper medical support they need.