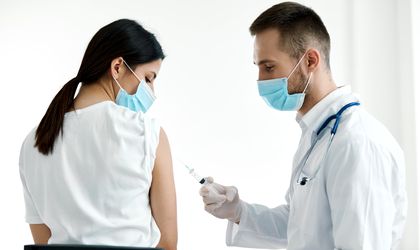 The number of 1 million vaccinated people has just been reached in Romania, but the questions regarding the benefits and safety of vaccines, as well as the dynamics of the post-vaccine immune response have not yet been fully answered. REGINA MARIA Healthcare Network is announcing the first results of a study evaluating the post-vaccinal immune response. This study started in our country immediately after the administration of the first vaccine doses. Benefiting from the scientific support of Professor Victoria Aramă PhD, Primary Infectious Diseases Physician, in January 2021 REGINA MARIA team launched a research that aims to evaluate post-vaccination antibody dynamics to estimate the level of protection provided by the vaccine against SARS-CoV-2 infection.

After the start of the first vaccination stage, REGINA MARIA enrolled in this study a group of 313 people vaccinated with Pfizer serum, of which 259 (82.7%) women. The measurement of antibody titer was performed one week after the second vaccine dose, and the antibody titer will be re-assessed at 3 and 6 months post-vaccination, similar to serological monitoring applied in clinical trials. To follow the post-vaccination serological dynamics, the titer of anti-SARS-CoV-2 antibodies was measured using a high-performance serological test method based on the electrochemiluminescence technique, with detection and titration of anti-spike lg antibodies.

“Our study was performed using Roche Elecsys Anti-SARS-CoV-2 S quantitative tests, which identify the entire titer of developed antibodies, including neutralized IgG antibodies that provide long-term immunity. The reference value for these tests is 0.8 U/ml and any value exceeding this cut-off indicates the presence of specific antibodies in the analyzed sample of biological product”, says Dr. Andreea Alexandru, Primary Laboratory Physician and Medical Director at REGINA MARIA Clinical Laboratories Division.

What are the indicators that show whether we are protected or not?

Preliminary results of the study show that the immune response after vaccination is broader in people who have already had COVID-19 disease than in study participants who said they have not had this infection. As a result:

“Establishing clear thresholds and reference intervals in order to validate the degree of protection that each person receives after vaccination is among the most important goals of the international medical community. Following the statistical analysis, the preliminary data of this study carried out on a group of over 300 people vaccinated against COVID19 in Romania are promising”, said Professor Victoria Aramă PhD, scientific consultant of the study carried out by REGINA MARIA.

The REGINA MARIA study on the natural immune response acquired by former COVID-19 patients, launched in the summer of 2020, had already shown a higher level of antibody titer for people in this age group.

“We have been closely monitoring the post-vaccine immune response of people aged over 50. The conclusion that the vaccine offers them almost double protection is extremely important and we are certain that very good vaccine coverage in this age group will impact the health of the entire population”, adds Dr. Teodora Ionescu, Epidemiologist.

Women tend to develop a higher level of post-vaccination protection

Preliminary data obtained in this study identified a correlation between the evolution of the post-vaccine antibody titer and the patient’s gender. Thus, the average titer of antibodies is significantly higher in vaccinated females, 44% higher in those who previously had the disease as compared to men who were previously infected. In the sublot of people who have not had the disease, females had an average titer of post-vaccine antibodies 12% higher than the titer observed in men.

“Studies have emerged in recent scientific literature that suggest that estrogen hormones might play an important role in obtaining a higher antibody titer in women than in men after vaccination against COVID-19. These observations should be analyzed in future studies and validated by the international scientific community. Preliminary results of our study agree with international results, suggesting that women tend to be better protected after vaccination, regardless of whether they previously had SARS-CoV-2 infection or not”, adds Professor Victoria Aramă, PhD.

The study conducted by REGINA MARIA Healthcare Network shows that in people who have been infected with the SARS-CoV-2 virus the titer of IgG anti-spike antibodies has higher values, ​​as the interval between the time of healing and the time of vaccination increases. For people who have had COVID-19, vaccination after at least one month after healing appears to increase the post-vaccinal immune response, objectified by the high titer of IgG antibodies.

According to current CDC recommendations, people who have had the disease can delay vaccination for up to 90 days after healing, time period when the risk of reinfection is estimated to be low. This recommendation varies depending on the risk of exposure and the individual risk factors of each person for severe forms of COVID-19, as well as on the epidemiological context.

This trend can also be explained by optimizing immunological memory over time. A study published in the prestigious Science journal showed that after infection with SARS-CoV-2 the number of specific B lymphocytes increased progressively over time. Six months after the onset of symptoms, study participants had a significantly higher number of memory B lymphocytes than one month after onset. Although the number of memory B lymphocytes appeared to reach a plateau a few months after onset, their level did not decrease during the study period.

“Preliminary results of our study suggest that people who have had the disease should wait at least a month after healing before taking the first dose of vaccine. The natural immune response after the disease persists for a while, after which potentiation of the protection through vaccination can be obtained. As for the high antibody titer detected in vaccinated patients more than 90 days post-COVID19, it may be too early to draw a conclusion. The evolution of antibodies may vary over time, and phase II of the study, which will measure the titer of post-vaccine antibodies after 3 months, will help us monitor the antibodies dynamics for each sublot of patients”, says Nirvana Georgescu, Quality and Patient Safety Director, REGINA MARIA Healthcare Network.

The REGINA MARIA study will carry on according to the established methodology. Soon, the third stage of vaccination will start at national level and the vaccination will be available to more and more people. As vaccine coverage expands, careful monitoring of the dynamics of the post-vaccine immune response in growing groups of vaccinated individuals will allow physicians and authorities to better understand the epidemiology of this infection and implement more effective prevention and control strategies leading to a limitation of the pandemic duration.