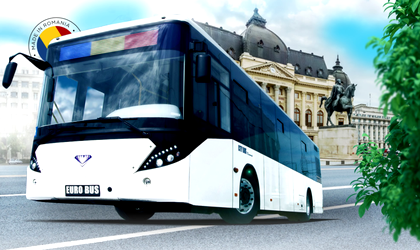 Starting this year, MC Truck & Bus SA will produce electric buses in Ciorogarla, near Bucharest, in partnership with Zonson Smart Auto Co LTD, a subsidiary of the Chinese giant ZTE. Romania will thus have the first manufacturer of electric buses.

In the first phase, 200 units will leave the factory annually. Over the next stages of development, the deliveries will amount to approximately 500 units per year, according to the officials of the Romanian factory. The Chinese partner offers the electric solution for the bus and the integration, but the bus will be exclusive Romanian product.

The electric buses manufactured by BMC Truck & Bus and ZTE will supply both the Romanian and the European market, but also other regions in the world, Romania thus becoming an exporter of electric buses.

The bus will be sold under the Euro BUS DIAMOND brand, a brand already known on the local market, in the diesel version, which has won several public tenders in Romania. However, as diesel is a closed topic at European level, the Euro Bus Diamond bus has turned to the electric solution.

“The future of mobility is electric, and ZTE has the experience of producing thousands of electric buses annually. It is known fact that China is a leader in this field. The prototype of the new electric bus produced in Romania will be finalized somewhere in March-April 2022, then it will go for licensing at the Romanian Auto Registry, and at the end of summer, the beginning of autumn, the production line will start”, states Silvia Colacea, Executive Director to SC BMC Truck & Bus SA.

“We are analyzing the European market since 2018 in order to highlight business opportunities. Romania had come to our attention, considering the rich industrial heritage, the large number of car components manufacturers, a fleet of obsolete public transport that needed to be replaced, and also the proximity to important markets such as Western Europe and Turkey. At the end of 2018, we identified the BMC Truck & Bus company, which already had a bus factory near Bucharest, so the idea of ​​the partnership came naturally. Now that the partnership is materialized, we will work together to produce and sell EuroBUS Diamond – Romanian brand, Powered by ZTE, in Romania and for export”, says Li Senjian, Oversea Regional Director of Zonson Smart Auto Corporation. The company is a subsidiary of the ZTE holding company that produces, delivers and integrates solutions for electric buses, with exports to South Korea, Kazakhstan, Germany, Hungary, Greece, Italy and the United Arab Emirates and England.

EuroBUS Diamond electric will be produced, until 2024, in all length versions required by the market, i.e. 12 meters, 8.5 m, 6 m and 18 m (with bellows). The investment so far is around 25 million euros. The production line already exists, the one previously used for the diesel model, but it will be adapted for the production of electric buses (new equipment, a new hall). Overall, this means an investment worth around 5 million euros, says Colacea, and in the spring of 2022, employment will beging. As a first step, about 150 people will be hired.

From 2002 until today, the entire investment from Ciorogarla is worth approximately 25 million euros. This includes production lines, service and administrative headquarters.

BMC Truck & Bus has already won several public tenders in Romania with ZTE electric buses (as a dealer), the last being 150 out of 151 units at the Ministry of Development, which makes the procurements for several town halls in the country.

BMC Truck & Bus is both a bus manufacturer and distributor with a production facility in Ciorogarla, near the Bucharest-Pitesti highway controlled by the Kilic family whose members are also Romanian citizens.

ZTE is a giant Chinese holding company that brings together dozens of technology companies with branches in many industries, with an annual turnover of over $ 16 billion. Its activities also include battery production, cars and electric public transport. ZTE ranks 4th in the world in telecommunications in terms of customer portfolio.