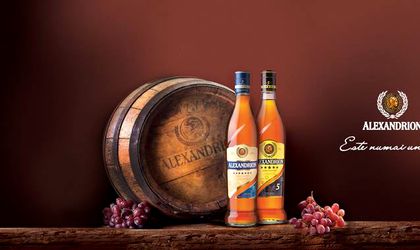 “This spectacular growth in turnover only reflects the results of the long-term development strategy of the group. So, today, the entire company is focusing on becoming a market leader in the HoReCa Premium area, both on spirits and on wines. In this respect, one of the strategic moves taken to achieve Alexandrion Group’s objectives focuses on dividing the sales force into divisions,” said Alexandrone Trading’s CEO, Razvan Vasile.

For proper implementation, the two sales divisions will be run by two alcohol professionals. Thus, the HoReCa Premium and Business Developement division of Alexandrion Trading, the only company responsible for the sale, distribution and marketing of the entire range of products owned by Alexandrion Group, as well as imported brands and the recently acquired vinification business, will be coordinated by Nicolae Costea , who until recently served as the national sales director of the group.

With over 18 years of experience in sales, co-ordination and management of shop and field operations, Nicolae Costea has been part of the Alexandrion Group for more than 4 years. In the future, its attributions will focus on developing business opportunities for our company in the beverage industry as well as on the operational and strategic coordination of the division with a clear goal of bringing the company first in the spirits and wine sector HoReCa Premium area.

The sales diversion to traditional trade and Modern Trade formats is now under the coordination of Costin Alexandru Ghiţa, a professional with over 20 years of experience in sales and marketing. He comes with his extensive expertise in wine sales management. Before joining Alexandrion Group, Costin Alexandru Ghiţă had, for 14 years, the national sales of one of the largest wine-producing companies in Romania.

Nicoale Costea and Costin Alexandru Ghita will be coordinated by Razvan Vasile, CEO of Alexandrion Trading, the company considered the group’s commercial arm in Romania.

Alexandrion Group is a leader in the production and distribution of alcoholic beverages in Romania. The group consists of the Alexandrion Distilleries and the SABER 1789 Distilleries, which, together, embody a history of over 200 years in the local spirit industry and created some of the strongest brands in Romania, both domestically recognized and international for their quality and refinement. Portfolio of own products include all the categories of spirits requested on the market, including traditional Romanian beverages and international products. Among these, the most famous are Alexandrion 5 * and 7 *, Alexandrion 100, special edition dedicated to the Centenary, the famous Brancoveanu XO, VS and VSOP, SABER Elyzia fruit liqueur, Zolmyr fruit distillate, Vodka Kreskova, and other products have assured themselves the company’s leading position in the Romanian spirit and traditional beverages market.

Alexandra Alexander (Alexander Vodka, Alexander Lemon and Alexander Gin) entered the company’s portfolio by acquisition in the early 2000s. The group’s portfolio expanded in 2018 with award-winning quiet and sparkling wines after the company acquired six other companies of wine production in Romania.