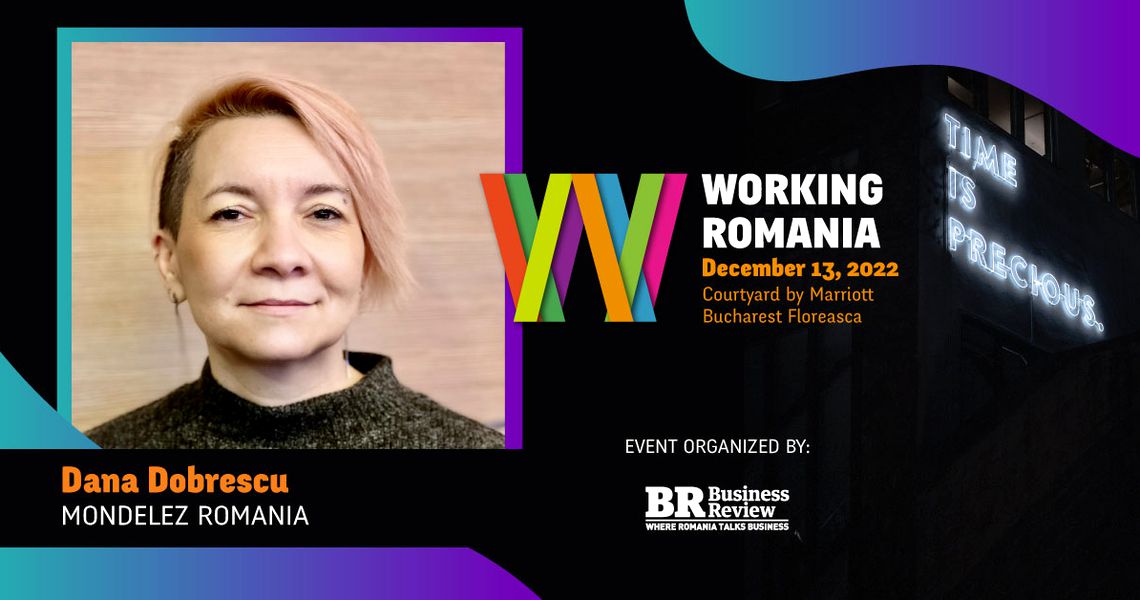 Dana Dobrescu, corporate & government affairs manager at Mondelēz Romania, will be a speaker at Business Review’s Working Romania HR Conference. She will be a speaker in the first panel of the event – “Keeping an eye on the #FUTUREOFWORK” – together with Marius Budai, Minister of Labor and Social Protection and Tiberiu Csaki, Partner, Head of Employment and Labor at Dentons, which is set to start at 11 AM. Join her, and an entire roster of great speakers, in person, on December 13 at the Courtyard by Marriott Bucharest Floreasca!

Dana Dobrescu is an experienced communications manager with a demonstrated history of working in the consumer goods industry, skilled in Marketing Management, Photography, Corporate Social Responsibility, Integrated Marketing, and Crisis Communications. She is the corporate & government affairs manager at Mondelēz Romania since April 2018.

According to Dana Dobrescu, the onboarding process is clearly more difficult in a virtual environment. Technical knowledge can definitely be acquired in a flexible setup, but the connection to company culture, networking within the company, and getting a sense of how the company really is beyond the formal employer branding proposition are trickier. “We also had this kind of feedback from newcomers who joined the company during the pandemic. That’s why I think it is important to look at the onboarding process with special care these days. At Mondelez, we maintain a very flexible approach, with a hybrid working model. We encourage the return to the office for collaborative purposes, for all hands-on deck gatherings, and for celebrations—like the recent 10-year anniversary of Mondelez,” Dobrescu explained. At the same time, the company also encourages each function to have conversations about their way of working, so as to balance the need for office-based connection and individual needs. They also try to understand that different people have different approaches: some of them really cannot work from home, while others only want to come to the office in certain circumstances, so the level of flexibility varies. “Our employees take the most appropriate decision together with their teams and they have access to on-demand sessions with the HR, communication, and leadership teams to understand how to frame the conversation within their team to make the best choices,” she added.

“If we redesign the office space to enable connection, collaboration, co-creation, and celebration, then it will make sense for each of us to come back to the office, while still maintaining a flexible approach. Redesign means a rearrangement of the physical space—with more collaborative places and with modern formats that go beyond meeting rooms—as well as a change of mindset.”

No one wants to be invited to the office just to send emails or spend time in calls. “But we may want to come from time to time to brainstorm together, to have an informal chat or a productive meeting where we work on a joint project, with a common vision. Furthermore, coming to the office benefits new employees during their induction period, as it allows them to connect deeply to the company culture, its way of working, and, more importantly, to the people­—both teammates and those in other functions. It’s not the fixed schedules that matter, those two or three days per week, but rather what happens at the workplace while people are there,” Dobrescu says.

The rise of quiet quitting

For the last few months, the term “quiet quitting” has been everywhere on social media, and it’s defined as not taking on any more responsibilities than your job description requires. Popularised among Gen Z and millennial workers, the phrase is often tied to the pandemic’s disruption of traditional office culture.

While the exact phrase may eventually fall out of vogue, the behaviour it describes seems to have significant weight, with 82 percent of young workers saying that doing the minimum required for their job appeals to them, according to a new study conducted by Axios and research firm The Generation Lab, which involved 828 participants aged 18 to 29. Of those surveyed, just 5 percent said that doing the minimum at work was completely unappealing to them, with 13 percent saying it was “not very appealing.” The biggest group, those who responded “pretty appealing,” made up 39 percent of the total, while 31 percent responded with “extremely appealing.” Twelve percent said that they were already doing the minimum. The biggest motivating force on the job for the survey’s respondents was money, at 52 percent. Skills and experience followed at 20 percent, and purpose and mission at 15 percent. Only 8 percent of respondents said their main motivator was “fun.”

The survey also asked respondents to rank what they considered to be important in their lives. Most selected either “family” or “mental health” as priorities, at 36 percent and 30 percent, respectively. Just 6 percent of respondents ranked work as being the most important.

Moreover, around half of US workers stated that they were “not engaged” at work, according to a Gallup survey released in September. That means that they’re feeling detached from work and doing the bare minimum—something similar to quiet quitting.

But what is the situation like in Romania? According to Dana Dobrescu, Gen Z is very open and genuine and has an active radar scanning for authenticity and the meaning behind actions. They also look at employers in a broader context, as they are interested in a company’s ESG platform and they ask questions—as early as the recruitment phase, but also afterwards—about concrete programmes and clear actions the company takes for the environment and communities. “Gen Z is acting from a place of meaning, trying to match the company’s purpose with their personal purpose. So, for the young generation, a job is not just an activity they perform according to the job description; it’s rather an enabler of personal development. That’s why we’re going to see many Gen Z employees having initiative, challenging the status quo, asking and questioning, voicing their opinion, looking impatient for positive change, not being afraid of sudden disruptions. And if we look at their daring attitude without resentment and try to learn from their perspective, we can foster change and improve ways of working inside our companies, especially now that we have an open window for change, due to the pandemic’s impact on the working environment.”

According to Dana Dobrescu, the abovementioned study found that disengagement has increased lately among the new generations. Gallup also highlighted some changes that could be made in the workplace in order to boost engagement, such as employee development instead of employee satisfaction, a strength-based workplace, and purpose. “I think Romanian employees are also reconsidering their relationship with the workplace as a consequence of the pandemic, which had a direct and brutal influence on us all and made each of us reassess our personal health and wellbeing, our relationships with our loved ones, and our priorities.” She also believes that this is the reason why we’re now seeing so many people asking about flexible work during recruitment interviews, and why this is seen as a competitive advantage. She is a firm believer that companies, be they Romanian firms, multinationals or start-ups, have one option: they should offer flexible benefits for employees, that are meaningful and relevant at the individual level and focused on personal growth needs. “We know that employees are engaged when they are happy, and employees are happy when they are happy people. There is a direct relationship between happiness and productivity. Let’s look at the drivers of personal happiness—social connection, self-actualisation, compassion, gratitude, finding significance, having a clear and inspiring purpose—and address them in the workplace, and this will unlock and boost engagement,” added the Mondelēz Romania representative.