Ileana Gutu (EY Romania): There is a favorable context for foreign investors to have a platform for development 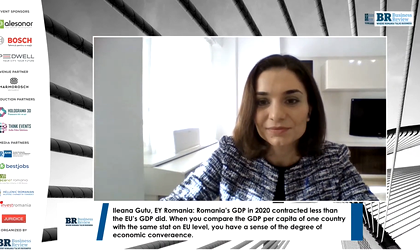 Ileana Gutu started her intervention on a positive note, highlighting the fact that Romania’s GDP contracted less than the EU GDP in 2020. „I will start with a positive note, because I’m usually a positive person and I will start by saying that it is a fact that Romania’s GDP in 2020 contracted less than the EU GDP. From an economic perspective, we’ve seen a 3.9 percent contraction in Romania, as compared to 5.9 percent in the EU.”

„If we look at the future, as an economist, the indicator that I like to follow is GDP per capita. When you compare the GDP per capita of one country with the GDP per capita at EU level, you have a sense of the degree of economic convergence and you know where you are heading to and no matter how winding the road is, there are great chances that you will be there eventually. In terms of the year 2020, Romania was at a 44% gap as compared to EU average. This means at the end of the day, a significant potential for our country, especially considering the last 10 years when we have consistently exceeded the average GDP economic growth rate.” Says Ileana Gutu.

Demographics are critical for sustainable growth and a key aspect to correctly assess our economic convergence is to also factor in the population decrease of our country. „Where I think we should be cautious is not to create an economic convergence only because of our base effect, as economists would say. We do not want a growth of GDP per capita growth due to a decreasing population. What we need is a sustainable growth and I think the trends in demographics are therefore critical for that.” Explains Gutu.

Romania’s competitiveness in the region

„Romania has the capacity to absorb investments and I would say it’s extremely competitive in terms of the overall tax rate. We are at 20% out of the total profit, which is though by far less than all the countries in our region. But still, despite the strong fundamentals, Romania does not place first in foreign investors’ preference. We have seen Hungary, the Czech Republic or Bulgaria, displaying higher FDIs in previous years.” Ileana Gutu stated.

Romania offers some of the best conditions and incentives for investors, thanks to its low taxes and high yields, and projects that foster sustainability and green development will receive significant support through a variety of state aid schemes for many years to come.

„Investors should be aware of the state aid schemes available already and what is to come. And if we refer to two of them that are working very well already, one for major investments exceeding EUR 1,000,000 and another related to job creation that is applicable when creating more than 100 jobs, I think they are very relevant and already have proved that they are there working. So yes, I think if we put through all the principles, I would say this is a favorable context for foreign investors to have a platform for development.” Concluded the EY Romania Associate Partner.