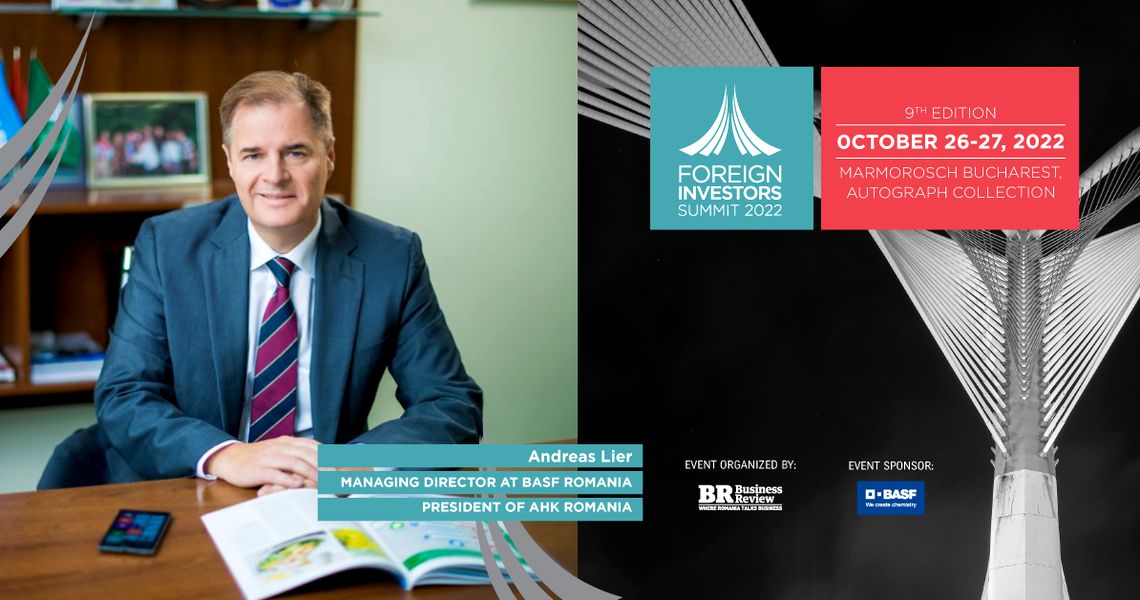 Andreas Lier, Managing Director at BASF Romania & President of AHK Romania, is set to become a speaker at the upcoming edition of Business Review’s Foreign Investors Summit. He will be part of panel dedicated to German investors in Romania titled “Building up Romanian Industry for centuries.” The session will start at 1:45 PM, after the opening keynote speech of the German Ambassador in Romania, H.E. Dr. Peer Gebauer. Claim your FREE VIP invitation and join an entire community of foreign investors, C-level executives and top business professionals.

After finishing his university studies with a degree in economics Lier got a job at BASF in Germany. Four years later, he took over as director General Manager in Russia for the same company. Subsequently, Andreas Lier held various management tasks for BASF worldwide, including in South Africa, Middle East, China, Eastern Europe. From 2012 to June 2019 he was general manager BASF Ukraine, after which he was appointed General Manager of BASF in Romania and subsequently also in Bulgaria.

“With full responsibility for Romania, I work closely with regional organisations and global associations, divisions and stakeholders, creating opportunities for further market development and enhancing the success of Romanian customers.” Andreas Lier says.

Andreas Lier also reminds us that the lack of financial means is often one important reason why individual ideas never get materialized and points out that BASF wants to support in this respect start-ups and innovators. “Postulates of the Green Deal are rather broad so we believe that numerous innovators will recognize that precisely their idea matches the project aims. Whether we are talking about solar energy and continuous discharge rating (CDR) batteries, smart transportation, or the most affordable and healthiest ways to produce food, BASF will give financial aid to support the development of the best idea”, pointed out Andreas Lier.

Among the achievements of AHK Romania’s 20 years of activity is the fact that Germany is now Romania’s main economic partner, with trade worth 35 billion euros. EUR and investments of 11 bn. EUR 11 billion, according to AHK Romania President Andreas Lier. He listed the main areas on which AHK focuses its activity: vocational training; sustainability, i.e. energy efficiency, renewable energies, waste management, city development; the Court of Arbitration, as an alternative to the usual judicial procedure; innovation. In the complicated global economic context, Andreas Lier looks optimistically to the future, taking as his trump cards people, successful companies and the energy vector (both green and fossil): “Let’s play our cards together for a strong Romania in a strong and progressive Europe,” he urged.