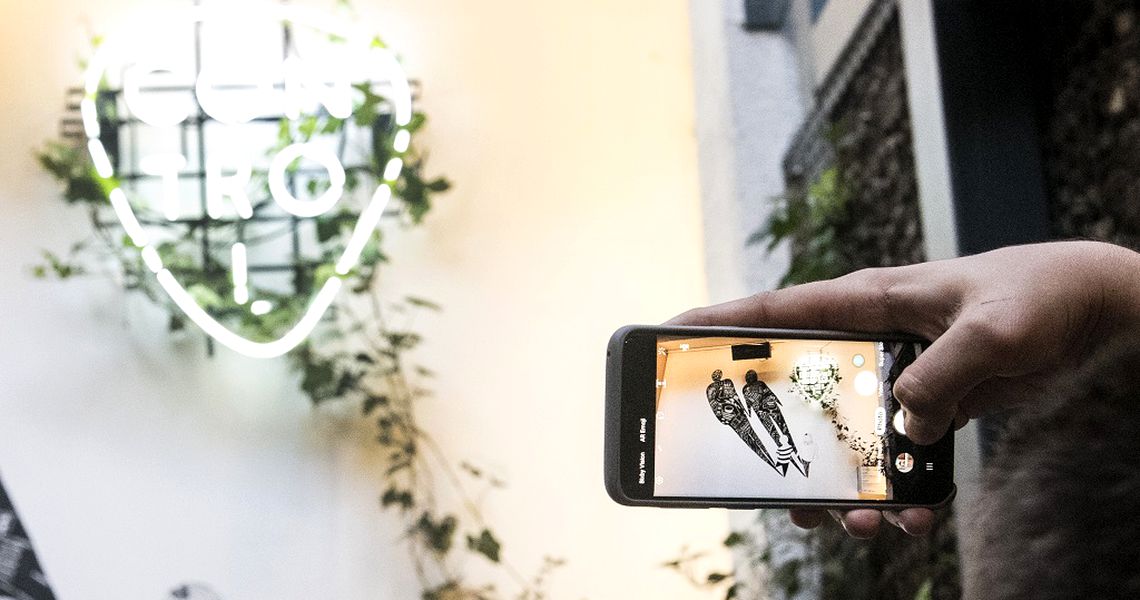 In recent years Bucharest has become a more cosmopolitan city, embracing the arts and culture and taking its creative side to a new level. Street art is widening its borders, as murals painted by artists are incorporated into clubs’ terraces, in an unprecedented collaboration between artists and brands.

From J’ai Bistrot Bucharest’s latest mural, painted by the artist Raluca Bararu and promoting the new season of Netflix’s Money Heist, to the coffee shop Beans & Dots, Control Club’s terrace and the already famous Arthur Verona Street and Calea Grivitei, to the Outline Festival and One Night Gallery, street art is opening up Bucharest’s colorful and creative side, enlivening the strolls of tourists and locals alike, and encouraging passersby to stop in for something refreshing on a beautiful day. Or night.

In July, Globalworth District, the first art & tech quarter in Romania, hosted a collaborative street art exhibition amplified by technology that showcased big names in Romanian street art such as Pisica Patrata, Sweet Damage Crew and Mircea Popescu, as well as up-and-coming artists such as George Stanciu. For one night only, the exterior space between the three Globalworth Green Court buildings displayed characters, shapes and colors that were explored through emerging technologies (AR with the dARe by Samsung app), VR and interactive installations.
“With each new edition of the Globalworth District project we continue our promise to develop a community for the people in our buildings where they can socialize and enjoy experiences that integrate technology and art. The positive reaction from our tenants to the previous events is one of the main reasons we are thinking of new activations for the next event, through which they would be directly involved in transforming the office space,” said Georgiana Oltenescu, head of marketing and communication at Globalworth.

When urban art jives with the atmosphere

Another venue that has recently been putting emphasis on street art is Control Club, where alternative culture has always found its place through a convergence of music, events, atmosphere and people. In its 11 years of activity the club’s mission has been to facilitate the Bucharest public’s access to Europe and the world’s latest trends in music and art. Now, Control’s platform has got a new dimension by launching its first “canvas” of open-space urban art, open daily and almost non-stop, bringing together visual artists and brands that feel the city vibrating stronger towards 4, Constantin Mille Street.

According to Control’s representatives, although Bucharest is a large city, its street art – tags, graffiti, murals – don’t seem to visually enrich the capital’s story, as there are way too many and too hidden, while Romanian art is suffocating in small galleries and rigid museums. This analysis gave rise to the idea of TAG YOUR IDEAS, a place where the artist is invited to create an urban story that would be revealed to a formed public.

TAG YOUR IDEAS seeks to become a new urban visual communication platform that supports an artistic manifestation that beautifies our existence. Each month, a new artist will reinterpret the billboard-wall in the club’s interior garden, contributing to a dialog already started by other artists about how the public space in the city can be used, at the intersection between public and private.

The eclectic mélange that this project wants to create will last at least a year and complete an urban cultural dialog started 11 years ago. The curator is Eugen Radescu and the first artist was Andreea Chirica, illustrator and author of graphic books. She published The Year of the Pioneer in 2011, which she took to Comic Con New York and the International Comic Books Saloon in Barcelona. Her second graphic book Home Alone was part of the central exhibition Romanian Design Week 2017 and won the award for Illustration at “Cele mai frumoase carti” din Romania (The Most Beautiful Books in Romania), also in 2017.

“Orasul la picioarele noastre”  (The City at our Feet), as the artist has unofficially named her work, is a visual plea for the exploration of Bucharest, whether by car, taxi, scooter, bicycle or on foot, and for us to assume the city as part of ourselves.

“The brief asked for an artistic representation of the idea that people bring life to the city. I went further with this thought and interpreted it as ‘the people are the city’; the streets, buildings and parks are (or should be) an extension of their being. I got what I hoped for: an opportunity to showcase my work in a non-traditional way and to a public that doesn’t know what I do. I also loved the process of doing a mural. It is a chance to work on a medium that I wasn’t very familiar with (I usually draw on paper or canvas). I liked it a lot and I would like to try it again. Maybe it’s the beginning of a series of murals or maybe just an isolated case, only time will tell,” said Chirica.

TAG YOUR IDEAS is a new visual communication platform for the city, supporting an artistic manifestation that embraces our existence. Alexandru Manda, project manager for TAG YOUR IDEAS, added that the concept is not necessarily different from other murals, but Control is just providing more explanation and a wide, international and artsy public for a commissioned artist.

Where did the inspiration come from? Actually, foreigners, says Manda: a lot of tourists come to Control having heard about it and they take pictures of the club’s details – not to mention everyday customers who come to enjoy the music, both DJ sets and live gigs.

The artists who will be showing their art on the terrace are chosen with the help of curator Eugen Radescu, who gave the Control team a list of Romanian artists whose style and type of art could be integrated into the story of Control Club. The brief should be a challenge for the artist himself/herself. And the list is still open, with the club happy to accept suggestions of artists who jive with its atmosphere.

To secure corporate support for the project, Control’s representatives convinced Clever and other brands to accept an alternative to the traditional commercial outdoor billboard. “It’s basically a very smooth line between art and advertising – with probably the best unique selling proposition: a great and numerous artsy public who understand the concept and why it is important to have clever brand activation,” said Manda.

And Control Club is not the only one opening itself up to street art and murals. In a first for Romania, the Neurology Romanian Society alongside Roche Romania and the main associations of neurological patients launched at Beans & Dots Bucharest over May 31-June 2 “Când usor devine greu. Scleroza Multipla” (When Easy becomes Hard. Multiple Sclerosis), a program to allow anyone to experience the challenges faced by people suffering from MS and see how it feels when an easy thing becomes complicated. Beans & Dots Specialty Coffee Shop became, with the help of some decor elements and a specially created digital app, VR and a tactile glove (VR Haptic Glove), a multi-sensorial space that stimulated MS symptoms for visitors. Internationally recognized artist Saddo created a mural that illustrates the symptoms of the condition. The 120 sqm artwork can still be seen in the courtyard of Universe Palace, on Ion Brezoianu Street.

“I think it’s awesome that the first mural I have painted this year is this one, here in Bucharest. The campaign is about experiences. It tries to simulate the symptoms of MS, in order for people to better understand what’s it about, and I wanted to create a mural about it, but not to make it necessarily dramatic. I tried to suggest some symptoms, such as double vision, dizziness, and objects seeming heavier than they actually are,” explained Saddo.

So is this a trend of Bucharest opening up its walls to the public for culture and art, and bars and clubs offering more of their space to support emerging local talents? “We live in a big, grey city which is currently suffocated by traffic jams and mostly horrible stores with too big and shiny commercials. We really hope these murals taking over the city are becoming a trend – and it’s partly because the artistic community has grown and more and more spaces are offering their walls for creating art. It is worth mentioning the amazing job Feeder/ Save or cancel Association is doing with the Un-hidden Bucharest project, presenting the urban art we have in the city,” said Manda.

In her turn, Chirica, asked if she believes this type of street art is helping Bucharest’s cosmopolitan image, commented that the city needs a lot more than that to become cosmopolitan, but a new place where art projects can be seen doesn’t hurt. “And it might give other companies and club/bar/restaurant owners the inspiration and courage to promote and encourage events and happenings like this one. If you have a white (or any other color) wall, why not ‘lend it’ to an artist? It’s good for image and for karma,” concluded Chirica.