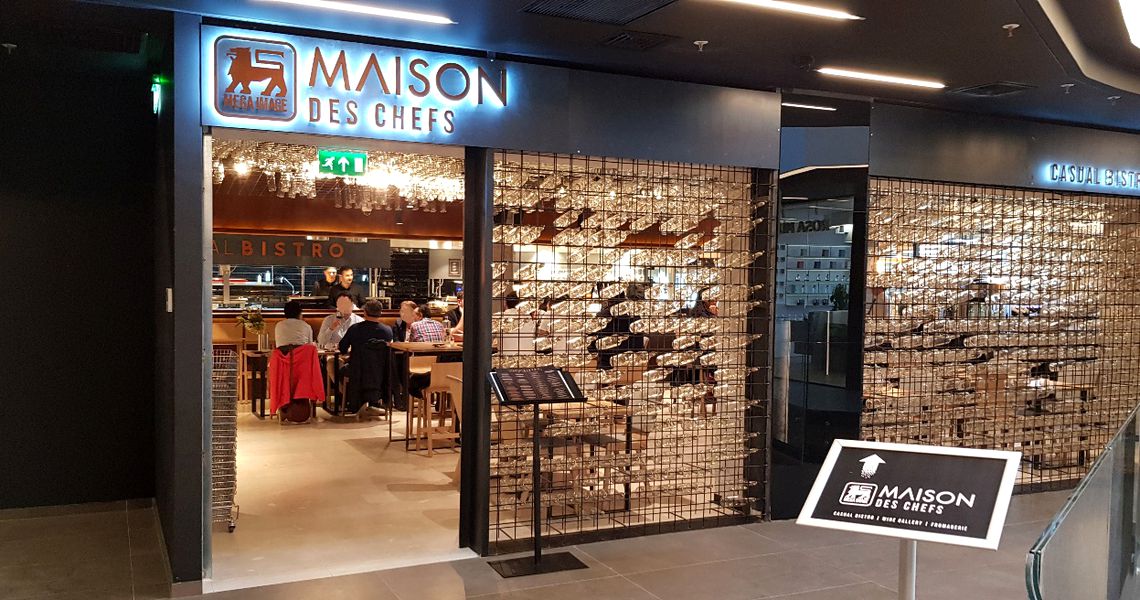 If I tell you that you can eat main courses at around RON 35 in a top restaurant in one of the best locations in town, you may think I am either mad, or prone to exaggeration. Well, one of those two descriptions may be true.

So let’s go to Maison Des Chefs, a new concept chophouse. The concept is a retail food store in which you can dine, or vice versa. But before we get down to the food, it is worth looking the place over. It is owned by Mega Image, who are unapologetically using it to showcase their food products, which of course you may dine upon in-house.

They have a huge ‘fromagerie’ – a large chilled room sporting a hermetically sealed display of international cheeses, all flagged with their country of origin. It is a true representation of all the great cheeses of Europe, with a selection of two or three cheeses from each cheese-making country.

Away to their ‘winery’ – a room displaying over 150 different brands of fine wines from across the world, and with average prices of around RON 100, this is serious drinking with brands that are generally not sold in Mega Image retail outlets. But wait, for here comes a big problem: if you buy the wine of your choice, and take the bottle to your table to drink whilst you dine, they raise the price of the wine by a further 20 percent as a ‘corkage charge’.

When you consider that they have made a full profit by selling you the wine over the counter, this penalty is an act of both craven greed and manifest commercial lunacy. It is a decision that will cost them dearly financially.

I asked them if I could buy my wine outside, bring it to my table and accept their corkage charge. Predictably, they refused. It was blatant hypocrisy on behalf of the House.

But let’s eat. The menu prices are a bargain. So for a starter, Blondie ordered a fat, creamy burrata cheese on toast, topped with pine nuts together with cherry tomatoes and zucchini with a side dip of olive paste. At RON 30 it was extraordinary value, and at such a size she thought it was a main, rather than a starter.

Although she was full, she had to punish me for all the beastly cruel things I said about vegetarians in last month’s issue, so she ordered a veggie burger with the ‘meat’ made from lentils. I had to mooch off her plate, and I hate to admit it was quite delightful with the veggie lentil filling having a thick meaty texture with a slight BBQ hint. It came with a goat’s cheese sauce with salad, beetroot and avocado along with baked potatoes. I didn’t believe they were baked as everything pointed to small wedges of pan fries. But at RON 35, it was great value.

I countered her veggie burger with a traditional beef cheeseburger and mixed salad for RON 35. It was unexciting and it was precisely what it said it was on the menu. Suffice it to say, if you go for burgers (and I do not) you will undoubtedly approve of it.

We passed on chicken with baked beetroot in a mango and mustard dressing at RON 35, a veggie pasta with goat’s cheese, spinach and sundried tomatoes at RON 39 and a pasta with mascarpone and truffle sauce at RON 49. But for me, the crowning glory of the House was their cheese boards, the best in town. There are four, each priced between RON 20-35 depending on the size of your selection. I died and went to heaven when I chose the Italian and French boards. They came with lashings of soft blue cheese, eccentric Occelli aged in whisky, cheeses fabulously smelling of truffles, accompanied by slices of foie gras, Parma ham and even Iberico. Go for it.

I truly recommend this place before they inevitably raise their prices. But beware that if you take your eye off the menu, your beverages will cost far more than your food.

Mega Image marks 25 years of activity in Romania with a donation of...