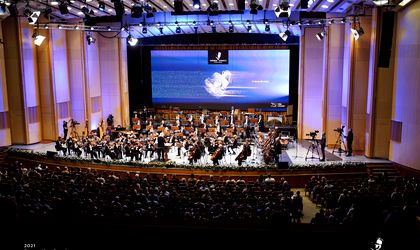 Great artists of contemporary music, such as Fazıl Say, Sir Simon Keenlyside, Patricia Kopatchinskaja, and Avishai Cohen, as well as a record number of premieres, are the Enescu Festival’s special treat for its audience in the dedicated series Music of the 21st Century.

Fazıl Say is a brilliant pianist, composer, and human rights advocate. He began his piano studies at the age of 4 and quickly impressed the music world with his talent. His concerts are distinctive, direct, open, and captivating.

For the first time at the Enescu Festival, revered British baritone Sir Simon Keenlyside will present the world premiere of Jonathan Dove’s Exile – Concerto for cello, baritone, and orchestra, in a concert alongside Mihail Jora Philharmonic Orchestra of Bacau, conducted by Jessica Cottis. This work was written specifically for Sir Simon Keenlyside and cellist Raphael Wallfisch.

Another most-eagerly awaited musician of the contemporary music series is Avishai Cohen, also coming to the Enescu Festival for the first time. One of the world’s most celebrated bassists, Avishai Cohen will perform with the Bucharest Symphony Orchestra on September 19.

A singularly fascinating artist of the moment, violinist Patricia Kopatchinskaja will perform in Bucharest the Concerto for violin, live electronics, and orchestra, a work especially written for her by composer Fred Popovici.

One of the Series’ unique features is the fact that the program includes two artists as both composers and soloists of their own works. Venezuelan Gabriela Montero will perform her Latin Concerto for piano and orchestra and guitarist José María Gallardo del Rey will play Diamantes Para Aranjuez.

Some of the most important members of the jury of the George Enescu International Competition are also present in this series, either in concert or with works on the program: pianist Peter Jablonski, cellist Raphael Wallfisch, composers Peter Ruzicka and Tim Benjamin.

The concert performed by the Banatul Philharmonic Orchestra of Timisoara conducted by Rumon Gamba will be held In Memoriam Remus Georgescu, in remembrance of the famous Romanian composer and conductor who passed away on July 30, 2021. The concert will open with his Triads Symphony.

Music of the 21st Century at the Enescu Festival

First introduced in the Enescu Festival program in 2017, Music of the 21st Century is a concept born out of the desire to create bridges between the Romanian public and the global scene of contemporary composition. Thus the Series brings to the Radio Hall stage some of the most important creations of the day, written by well-established composers, some of whom are also present as performers of their own works – such as Pascal Dusapin, Dan Dediu, Tim Benjamin, Salvatore Sciarrino, Avishai Cohen, and Fazıl Say.

The Romanian musicians’ acquaintance with contemporary international creation is strengthened thanks to the decision made by the George Enescu Festival to dedicate six of the seven concerts of this Series to Romanian orchestras. Alongside guest conductors such as John Axelrod, Jessica Cottis, Tito Ceccherini, and Alexander Liebreich, the Jubilee Edition brings to stage the Philharmonic Orchestras of Cluj-Napoca, Bacau, Timisoara, Iasi, Sibiu, as well as the Bucharest Symphony Orchestra.

Information on the purchase procedure and conditions of access is available on the Festival website, under the Tickets section. It is still possible that changes are made to the Program due to the pandemic. Access to the concert halls will only be allowed if sanitary conditions are observed; face masks will be mandatory indoors at all times.

The 2021 George Enescu International Festival is scheduled to take place between August 28 and September 26, 2021, with an exceptional musical program, sustained by over 3,500 international and Romanian artists for a record duration of 4 weeks, with measures in place to reduce potential health risks for audiences, artists, organizers, and journalists.