VIDEO. Thousands protest against the Romanian government: “We don’t want to be led by thieves” 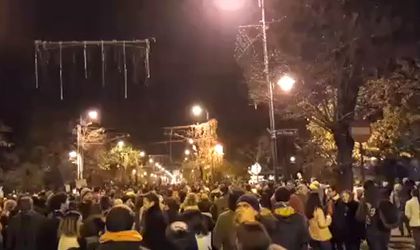 Several thousand people took to the streets across the main cities of Romania to protest the fiscal changes passed by the government and the decision of the ruling coalition to push controversial amendments to the judiciary in Parliament.

Around 1,000 people gathered in front of the government building in central Bucharest and went on a march to the headquarter of the ruling party PSD where they shouted “Thieves, thieves”, “Nest of thieves and thugs” and “Snap elections”. People have also been calling for the resignation of the current leaders of the ruling coalition, asking the current government to step down.

People also went out to protest the center-left government led by Mihai Tudose in some of the largest cities. For instance, some 2,000 people were protesting on Sunday evening in Timisoara, while another 1,000 were in the center of Cluj-Napoca. Close to 1,000 people protested in Brasov, while smaller crowds gathered in cities such as Targu Mures, Ploiesti, Bistrita, Iasi, Alexandria and Alba Iulia, according to Agerpres newswire.

The head of the Social Democratic Party (PSD), Liviu Dragnea, said on early Sunday that the people protesting the fiscal changes did not have all the information. Meanwhile, Dragnea confirmed that on Monday he will meet with anti-graft prosecutors from the National Anticorruption Directorate (DNA). Dragnea, who has a suspended jail sentence and is tried in a separate case, did not say if he is being investigated in a new file.

On Wednesday, the government approved a raft of controversial changes to the Tax Code, including the shift in the payment of social contributions from employers to employees. Around 1,000 protested in front of the government building, while ministers were approving the draft bill amending the Fiscal Code. Meanwhile, trade unions said that protests will continue, warning that the net wages of many Romanians might fall next year due to the amendments.

Last week, over 20,000 people protested against the government in some of the largest cities in Romania.

Meanwhile, Coalitia pentru Dezvoltarea Romaniei, the main business association in Romania, has warned that the “massive changes” to the Fiscal Code that will be implemented in seven weeks might lead to “missed investments” and the placement of Romania “in another league for investors.” The coalition represents 2,000 companies employing over 600,000 people, generating a combined turnover of over EUR 50 billion per year.

Video source: All rights to FB page of Rezistenta TV