With the government having included a handful of new taxes in next year’s budget, investors’ associations have warned the state to step up its efforts to combat tax evasion and refrain from increasing the fiscal burden for honest taxpayers.

Policymakers argued the new taxes would cover the current gap in budget revenues, which hovers around EUR 700 million.

However, the business environment was angered by the manner in which the new fiscal initiatives were approved, without prior consultation of the private sector.  Business associations believe the unstable legal and framework is one the key factors that dents Romania’s competitiveness.

“The lack of predictability and consultation when setting new taxes will lead FIC members to reconsider their position on the local market and redirect present and future investment towards jurisdictions which offer a satisfying level of fiscal stability, at least in the medium and short term,” said the Foreign Investors’ Council (FIC), the business advocacy group comprising 119 multinational members with cumulated investments of around EUR 35 billion in Romania.

The fresh revenue will be used to finance large infrastructure projects, according to the government. In addition, royalties for all mineral resources excluding oil and gas will be hiked by 25 percent.

The Association of Romanian Businesspeople (AOAR) has found it hard to understand why the government would finance infrastructure works from the collected excises, when there are still a lot of EU funds available in this field. 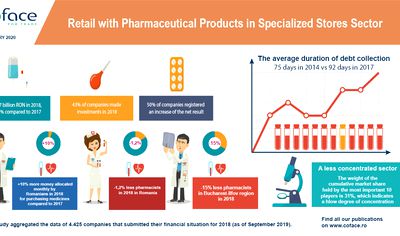 Read more about
Study: Revenues from pharmaceutical retail products up by 15 pct. in 2018 compared to 2017
read more

“This is an additional burden on companies who must pay additional excises. It is clear that we will see an increasing number of insolvencies in the coming period,” Constantin Coman, country manager of Coface Romania, told BR.

He commented that all the new taxes will ultimately have to be paid by Romanian consumers, through higher prices for transport and other products.

The business advocacy group AmCham Romania said the new taxes would “lead to a rise in the fiscal burden for Romanian taxpayers that is unprecedented in the past 20 years.” The group has over 350 members that are US, international and local companies, with total investments worth over USD 10 billion.

AmCham warned the new taxes would increase tax evasion, lead to a reduction in investments and destroy jobs. PM Victor Ponta said he would meet the advocacy groups, adding that Romania could not be an El Dorado when it comes to taxation.

“We have the lowest taxation, except Bulgaria. Forgive me, but I am responsible for the citizens of this nation. What should I do? Cut pensions and wages? Close hospitals as was done in 2010? I think this is wrong,” said Ponta, quoted by Mediafax newswire.

He added that the new taxes had been negotiated with international lenders, as part of a EUR 4 billion stand-by agreement.

The PM claimed that both AmCham and the FIC supported the loan deal.