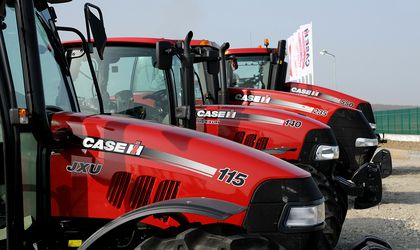 Some 1,800 – 2,000 new tractors are estimated to be sold this year in Romania, up from 1,200 in the previous year, George Stanson, business manager for Romania, Bulgaria, Croatia and Serbia at Case IH & Steyr Balkans representing agricultural and construction equipment manufacturer CNH, told BR. Not only this, but local farmers are also looking for tractors with more horsepower. The average horsepower for a new tractor is now reaching 250 hp whereas four years ago it was 140 hp.

Tractor sales will remain on an upward trend and over the next 5 years annual sales should reach 5,000 new units, added Stanson. However, this mostly depends on financing opportunities and the future Common Agriculture Policy for 2014 -2020, he explained.

“It is very important for the authorities to come up with solutions to increase the EU funds absorption rate. It is true that the absorption rate in agriculture is well above the average rate for other programs but it is still too low,” he explained.

CNH equipment is imported locally by Titan Machinery. The company presently operates a headquarter in Bucharest and five other dealerships outside the capital. Another sales office will opened by year end and in the fist half of 2013 another 4 branches will added to Titan Machinery’s national network, said Stanson. The investment in a dealership varies between EUR 200,000 and EUR 1 million.

CNH has 8 production facilities inEurope. Stanson says the company is considering investing in a factory in Romania, but has no concrete plans in this direction at present.

Back in 1993 CNH tried to buy the Romanian state-owned manufacturer Semanatoarea but negotiations failed and CNH chose to invest in factory in Poland instead.