OTV channel license cut off due to political advertising 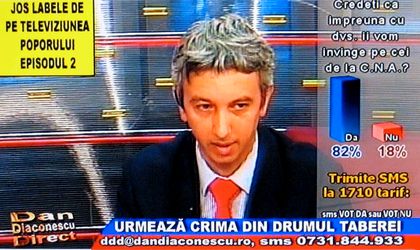 OTV has received the harshest fine yet from the National Audio-visual Council (CNA), which decided that the TV channel can broadcast only until September 28, due to political advertising appearing on the channel.

The current license will no longer be valid after September 28, in spite of the opposition of Dan Diaconescu, owner of the TV channel, who claims that he is not “a People’s Party member, that he does not make electoral shows but is merely a journalist who tries to interact with viewers.”

The CNA decision comes after two weeks ago, the audio-visual authority decided to apply a penalty to the channel which consisted in breaking off the transmission for 3 hours.

OTV obtained the broadcasting license in 2004. The license had a 9 year validity and was due to expire on April 1, 2013. However, the audio-visual authority axed the deadline to expiration date to half this time. For the channel to continue to function after September 28, the license should be prolonged with the CNA approval.
Otilia Haraga