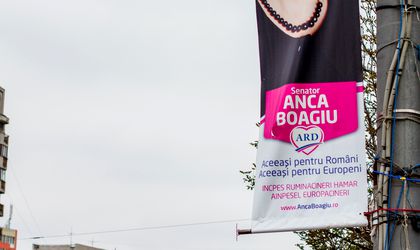 One candidate stood out in this year’s parliamentary elections with messages translated in the languages of the ethnic communities present in the circumscription where she is running to be elected. The slogan of the Alliance for a Just Romania ARD candidate Anca Boagiu’s campaign features messages in more than 20 languages. “The same for Romanians as for the Europeans” could be read in Bucharest in, among others, Greek, Rromani, and Turkish. BR asked the candidate what was the motivation behind targeting electoral messages this way.

I trust people and respect them. Lately, though, it looks like we’ve lost touch with each other, we forgot to communicate. We are constantly arguing and accusing each other. I cannot accept this state of things and I’ve found the solution: to address ethnic communities that live and work in Bucharest’s 2nd district, where I’m running for Senate, in their own language. Did you know that here lives the largest Chinese community in the capital city? They are Romanian citizens too, who work in Romania, and pay their taxes here. There are many Macedonians in this college, extremely tough people, with strong family values. I know them, extremely trustworthy people. Amongst my neighbors one can find Greeks, Armenians, Russians, Rroma people, Arabs, Turks. We all have something in common: we live and work in Romania. I’ve learned a little bit of each of their languages, out of respect for these communities. Do you know how much it matters to someone to greet them in their mother tongue? This is my way to say Romania can be also called “home.”