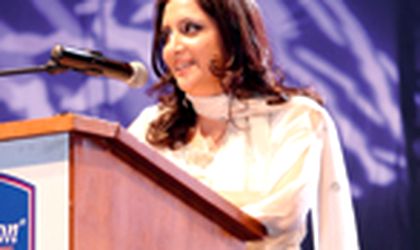 Following the charity gala, EUR 575,000 of this sum was obtained through sponsorships, donations and auction. Among the donations, EUR 100,000 was offered by the CopperBeach Group and EUR 40,000 were offered by the Vodafone Foundation. The Dutch embassy also supports this project through its program entitled MATRA- KAP.
The gala was hosted by television anchor Mihaela Radulescu and media figure Dan Vardie. The Italian team Scuderia Playteam SaraFree, winner of the FIA GT World Championship in Bucharest, donated objects that went for auction for important sums. EUR 100,000 were gained from the pilot's competition costumes and helmets, parts of Maserati cars as well as a painting created by Italian designer Davide Bodano in honor of the formula 3 Italian team. The Autoitalia group donated two ambulances for the hospital while Aston donated 20 air conditioning devices. This is the greatest restoration project of a hospital achieved with private funds. Up to the now, restoration works were carried out at the surgery section. The total sum needed to renovate the hospital amounts to EUR 1.5 million. The hospital treats 50,000 children yearly.