Yload, the developer of the first digital marketplace in Eastern Europe for freight transport, raised EUR 220,000 in a few hours 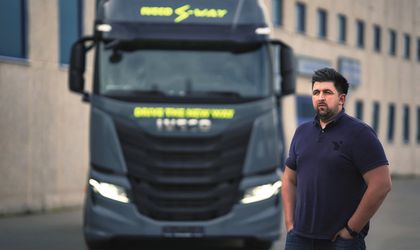 Yload.ro, the startup that created the first transport marketplace in Eastern Europe, obtained in just a few hours 220,000 euros from the 250,000 targeted on the online investments platform SeedBlink. The amount will be used in full for product and business development.

The founders of the platform that was launched in beta version in April this year, is ceding 9.09% of the capital, to a pre-money valuation of the company of two million euros. The minimum investigation ticket starts at 2,500 euros. Yload also has the option of extending the targeted funding up to 400,000 euros.

Yload, a platform based on artificial intelligence, was founded by Alexandru Huzău, a specialist with 13 years of experience in IT and online marketing.

“For about 12 years we have realized that the field of freight transport, both national and international, is facing problems in Eastern Europe. This field uses almost no new technology for process automation. A dispatcher who coordinates the trucks uses the phone to call the drivers, and for this reason, he cannot coordinate more than five or six trucks a day. Their job of searching for goods is much more difficult, the dispatchers have to sit in front of the computer every day on a multitude of sites in order to find the goods. And, when the dispatcher finds the products, there is a possibility to be already sent through another platform because the platforms are not connected. Carriers, shipping companies and shippers are looking for solutions to help them be more efficient, to spend less time doing these repetitive processes. And Yload can be such a solution”, says Alexandru Huzău, founder and CEO of Yload.

The digitization of transport operations allows individual or small fleet carriers to reduce incidents, optimize costs and manage their vehicles more quickly and efficiently while simplifying access to routes and orders, customer interaction, document, and payment flow. At the same time, beneficiaries have access to a large fleet of carriers to be able to choose the right services and to receive real-time information on how to carry out or complete the transport. All vehicles on the platform are located via GPS systems.

For the following year, Yload aims for Series A funding to support the company’s expansion into Eastern Europe.

“We want the field of transport to become efficient and we aim to revolutionize the way the transport system in Eastern Europe works by generating added value for both carriers and beneficiaries. We plan to become the largest transport marketplace in Eastern Europe in the next two years. Specifically, we aim to have over 50,000 carriers on the platform with a fleet of approximately 400,000 trucks and vans from Romania, Ukraine, Bulgaria, Belarus and the Republic of Moldova”, adds Alexandru Huzău.

In the first three months since its launch, Yload has attracted more than 10,000 carriers to the platform, which operates more than 45,000 vehicles.