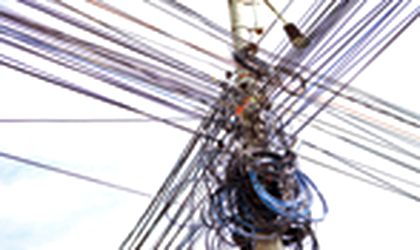 The project, called NetCity, will move the cable infrastructure in Bucharest underground.
The municipality will provide the public land under which the cables are to be buried and will choose the operator to build the new infrastructure and rent it to all the communication service providers using cable infrastructure. The project will be correlated with other infrastructure works in the city, like the ones for the roads and sewage system. The first phase includes more than 1,300 streets in downtown Bucharest.
The bid for the project took place a couple of weeks ago and only one company, UTI Systems, made an offer, although 24 companies had previously purchased the task book. UTI signed up Ericsson Romania, Alcatel Lucent and Neotel as contractors to help with the infrastructure works. The decision whether UTI Systems will manage and build the project might be announced by city hall representatives this week.
The firm's offer is even more advantageous to the city hall than it had stipulated, as UTI offered lower fees per provider for the renting of the network and higher annual incomes for itself, while the fee due to the city hall increased to 12 percent.
Alexandru Radu, executive director of the Infrastructure department of the city hall, said the offer submitted by UTI Systems was better than the requested criteria to enter the bid. “From the financial point of view, we asked for an annual income generated by the project of EUR 10 million between 2007 and 2009, EUR 18 million between 2009 and 2011 and EUR 27 million per year after 2011. UTI's offer is higher than that: EUR 13 million for the first period, EUR 26 million for the second period and up to EUR 36 million per year after 2011. The fee due to the city hall is also higher. We asked for 10 percent of the income, they offered 12 percent per year,” Radu told Business Review.
A simple calculation shows that for a standard contract period of 49 to 50 years, in which UTI will manage the network and retain the income generated by the project, the company would get up to EUR 1.4 billion after paying the city hall fees.
The initial investment in the project was estimated by the municipal authorities at around EUR 200 million and further upgrades might be needed during the exploitation period.

Cable operators oppose the project
The project has raised concern among cable players operating in Bucharest, as they have to drop their own developed infrastructure and start to rent it from the company managing NetCity. They agree with having the cables buried but do not want a different company managing their infrastructure. They proposed having their own cables buried in Bucharest' new sewage system. City hall representatives say the current infrastructure of the cable telecommunication operators is illegally placed on electricity stalls and that through this project they will become legal and the face of the city will change as well. “We asked for a symbolic fee for the renting the infrastructure, much smaller than the fees asked for by providers like Romtelecom, Metrorex and Conel, so that every provider could afford it,” Radu said.
The project is intended to solve the issues related to the monopoly of some cable operators which are present in certain areas of Bucharest and will improve the offer for the consumers. “While now, in most of Bucharest, the consumer has only one provider to chose from when it comes to cable TV and internet access, when NetCity is operational, I estimate that the choice will grow to at least four providers,” Radu added.
On the other side, industry representatives say that the project will create a monopoly for the project managing company over the telecommunication industry in Bucharest and that they would not be able to guarantee the quality of the offered services as long if they did not own and operate the infrastructure for these services as well. “Our suggestion would be to let the municipality build the tunnels, and let us build our own infrastructure there,” Radu Petric, president of the Cable Communications Association (ACC), said. In his opinion, the current version of the project is completely unreasonable and raises a lot of questions in sensitive issues for the cable operators.
The companies most affected by the project are large size cable providers like RCS&RDS and UPC, whose infrastructure is based exclusively on cable networks. The leader of the landline telephony market, Romtelecom, will not be affected, as the majority of its infrastructure in Bucharest is already buried underground.
“Romtelecom took part in several meetings with city hall representatives, our main demand being to be allowed to bury the rest of our infrastructure in our own tunnel system,” company representatives said.
The city hall estimated the length of the tunnel system for the NetCity project to reach about 5,600 km and that the project should be completed in at most four years. UTI Systems made an improved offer in this respect as well, saying the project would be ready in three years from the signing of the contract.