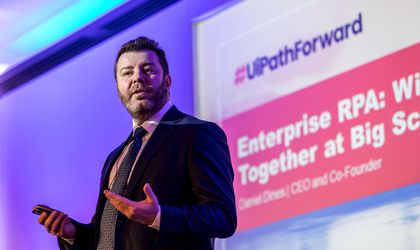 UiPath, Romania’s first IT unicorn, tripled its value in six months after receiving USD 225 million in a new founding round from Sequoia Capital and Google’s CapitalG, the WSJ reports. The Robotic Process Automation (RPA) software provider, currently a market leader, began as a Bucharest-based startup founded by a team of ten led by Daniel Dines, the company’s CEO and Marius Tirca (CTO).

The new founding round, led by Sequoia Capital and Capital G, comes six months after the company raised USD 153 million from Accel, Capital G and KP, and saw its valuation shoot to USD 1 billion, achieving unicorn status. So far, the company has received USD 400 million in funding.

“After years toiling in obscurity, three startups have suddenly hit the jackpot in a corner of the enterprise-software market sprinkled with artificial intelligence,” the WSJ writes about UiPath Inc., Blue Prism Group PLC and Automation Anywhere Inc. “Now they are racing to one-up each other to appear the market leader.”

UiPath has recently been recognized as a leader in “The Forrester Wave™: Robotic Process Automation, Q2 2018” report, the company’s website reports. The company, which has offices in over 15 countries,  received the highest score among all vendors in the current offering category. Namely, Forrester gave UiPath the highest possible score in the “Market Presence” category and among the highest scores in the “Strategy” category. The RPA provider and also scored highest in the criteria of Bot development/core UI/desktop functions, architecture, system management and reporting.