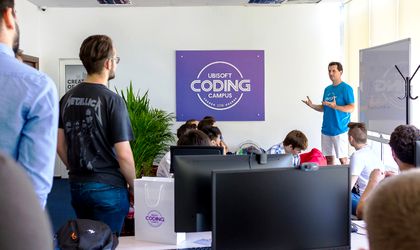 The gaming industry is one most attractive industry for many programmers or other IT professionals. It is also a very difficult one due to the fact that one must have many different skills apart from just coding. But there are always young willing to find a job in the gaming world and Ubisoft Coding Campus is one good example of that.

Ubisoft, one of the leaders in the entertainment industry, launched the Coding Campus, a 6-month international learning program based on a curriculum developed by Ubisoft’s online programming experts. Approximately 1,000 students and graduates from across the country, of whom more than 300 from Bucharest, applied for the 24 positions, with the competition comprised of 41 applicants per place.

Most of the candidates in Bucharest come from educational institutions such as the Polytechnic University, Bucharest University and the Academy of Economic Studies (ASE). The recruitment campaign, which took place over three months, also involved a series of technical interviews and tests to identify those passionate video game enthusiasts with a host of basic knowledge in programming language and an advanced level of English.

“Now more than ever, professionals who are able to experience and innovate in a new branch of programming that requires expertise at the highest level, talent, but also a passion for gaming is needed more than ever. We want Ubisoft Coding Campus to become a standard in the industry, a unique school in Romania to prepare experts in online programming,” says Grigoriada Stroe, HR & operations director of Ubisoft Romania, Serbia and Ukraine.

Between July 2018 and January 2019, the learners will use their knowledge to develop a 2D shooter in which they will implement multiplayer features and online services such as leaderboards or matchmaking technics. Courses involve attending Ubisoft Bucharest, within the Coding Campus lab, specially designed to provide participants with access to the latest technology used in the company. They will receive support from the 13 mentors – technical experts from the Ubisoft network worldwide, but also from the professors at Bucharest University and GameDev Academy.

Moreover, the students also benefit from a 500-euro monthly scholarship, as well as access to industry-specific e-learning resources, gymnasiums, domestic events or cafeterias.

After graduating, graduates will be able to continue their professional career in one of Ubisoft Studios participating in the program: Annecy, Bucharest, Montpellier, Paris, Quebec, Helsinki (Redlynx), Singapore or Toronto, with relocation support from the company.

The Ubisoft Coding Campus program is also run in parallel in the Ubisoft studio in Kiev.