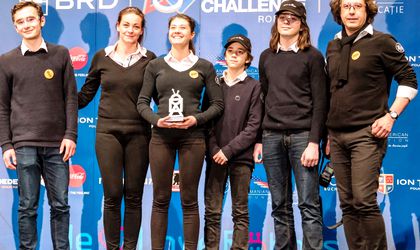 The robotics team of Transilvania Robotix will participate, with the support of BRD – Groupe Société Générale, at the Maryland Tech Invitational International Competition in Colombia, Maryland, between June 22 and 24, 2018. Students from Cluj-Napoca form the only team in Romania to be invited to the competition in the United States due to the results obtained at the BRD FIRST Tech Challenge Romania competition as well as other international robotics competitions.

“Since BRD has been committed to supporting and encouraging young technology creators, we have had the opportunity to get to know a lot of young, passionate, creative people, committed to what they. With the Transilvania Robotix team we have had great chemistry from the beginning, we share common values, and we want to develop together a space for all children wishing to learn robotics and to put their knowledge into practice,” said Roxana Milos , Brand Communication Manager, BRD – Groupe Société Générale.

“The participation of our team at Maryland Tech Invitational is due to the way we made the robot, the results obtained in the contests and the way we managed to convey our image abroad. We hope on this occasion to honor our country, being the only Romanian team invited to this competition. The partnership with BRD has confirmed that we are on the right track and has given us confidence to go further,” said Nicoleta Tirtan, team mentor and President of the Transylvania Robotix Association.

The Transilvania Robotix team is made up of four students of the Avram Iancu high school in Cluj-Napoca, Zeic Benjamin, Tirtan Anda Gabriela, Tirtan Alexandru and Tirtan Darius, and their mentors, Tirtan Nicoleta and Tirtan Tiberiu. The team was set up in October 2016 at the first FIRST Tech Challenge in Romania, organized by the Nation through Education Association, where they won the 2nd place in the Think Award and Design Award categories. FTC Dutch Open 2017, FTC Russia Open 2018 and BRD First Tech Challenge 2018 followed, followed by Transylvania Robotix with four prizes won.

The team carried on the results of the FIRST Tech Challenge competitions by setting up the Transylvania Robotix Association in order to promote STEM (science, technology, engineering and mathematics) education in Romania and to inspire high school students to exploit their curiosity and creativity in technical fields. In addition, the Transylvania Robotix Association and BRD – Groupe Société Générale jointly develop a robotics hub in Cluj-Napoca, which will function as a multifunctional robotics education area with workshops and other practical facilities.

The FIRST program was launched in 2007 through a pilot program in the American city of Manchester, New Hampshire, at the initiative of Dean Kamen, an American engineer, inventor and businessman. Globally, the program has four categories: for kindergarten, general school, high school and college; in Romania, for now only the high school program is present.

Transylvania Robotix’s support is part of BRD – Groupe Société Générale’s commitment to engaging in the development of the young generation through personal and professional development projects involving the use of technology and innovation under the MINDCRAFT – development hub platform at BRD.